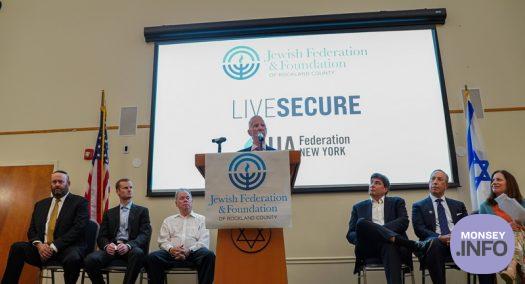 The Jewish Federation & Foundation of Rockland County held a ceremony announcing a first-of-its-kind security initiative supported by the UJA-Federation of New York & the LiveSecure project.

Rockland County accounts for the highest Jewish population density in the U.S. and has experienced an increasing number of bias incidents and attacks. The Jewish Federation & Foundation of Rockland County is responding to this escalation and announcing it is the first community of nearly 150 Federations to benefit from the LiveSecure project, a security initiative. The initiative will provide security assessments, active shooter and volunteer training, federal and state government Nonprofit Security Grant Program application assistance, develop a coordinated intra-community security network, and coordinate with local and county-wide law enforcement. The Jewish Federation & Foundation of Rockland County is joining with the Community Security Initiative (CSI) of the Jewish Community Relations Council New York (JCRC) to meet the growing challenge of securing the Jewish community in the face of rising antisemitic incidents of harassment, vandalism, and violence.

“There is no place for hate in our Rockland County,” District Attorney Walsh said at the event. “It cannot and will not be tolerated. Take a trip across Rockland County. It’s like going around the world.”