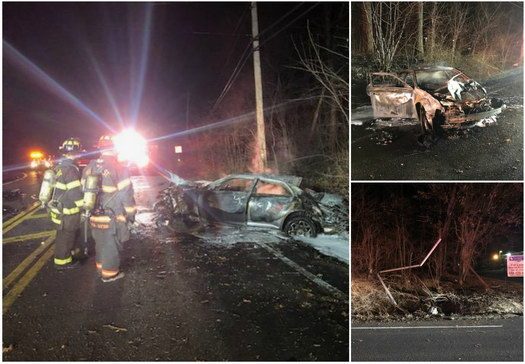 At 2:43am, emergency responders received a call to the area of Route 45 and Pomona Road for a car that hit a utility pole and burst into flames.

When police officers from the Ramapo Police Department arrived, officers found the vehicle had struck a utility pole and was already in flames. Thankfully the driver had been able to exit the vehicle.

While on scene, the Officers noticed that the driver appeared to be intoxication, and placed him under arrest.

He was transported to Nyack Hospital by Spring Hill Volunteer Ambulance for non-life threatening injuries.

Other agencies, including the Town of Haverstraw PD, Rockland County Sheriff’s Department, New York State Police, and the Hillcrest Fire Department were also on scene.

Orange and Rockland Utilities were called to the scene to repair the damaged pole.

The operator was issued several traffic summonses and released from police custody in accordance with NYS Bail Reform.