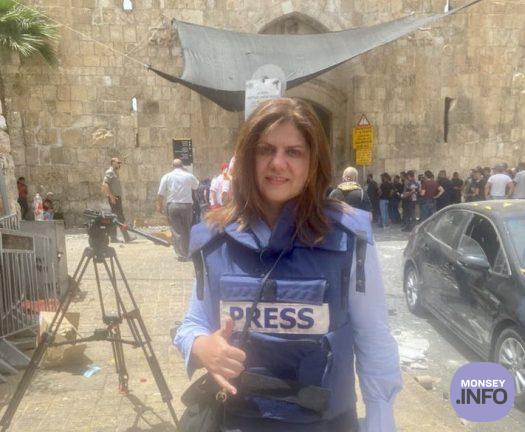 Al-Jazeera Reporter Killed In Jenin Firefight Between Gunman and the IDF, Investigation Underway

IDF Chief of Staff Aviv Kochavi has issued instructions to investigate the death of Shireen Abu Aqleh, the Al Jazeera reporter who was killed during a firefight between IDF forces and Arab terrorists in the Jenin area Wednesday morning.

The Chief of Staff said: “IDF units work day in and day out with determination, thwarting terrorism and preventing terrorist attacks. The activity is carried out wherever it is needed, especially in the Jenin area, where there is a high concentration of terrorists. During overnight activity, as in many other incidents, the Palestinians opened massive fire at our forces, firing wildly and indiscriminately in every direction. Unlike the Palestinians,” IDF soldiers carry out their firing professionally and selectively.”

Kochavi stated that “the reporter who was killed was at the scene of the battle. At this stage it is not possible to determine whose shooting she was hit by and we are sorry for her death. In order to get to the truth, we have set up a special team that will clarify the facts and present them in full and as soon as possible. The soldiers tonight acted under fire, and showed courage and determination to protect the citizens of the country, and so we will continue wherever we are required to.”