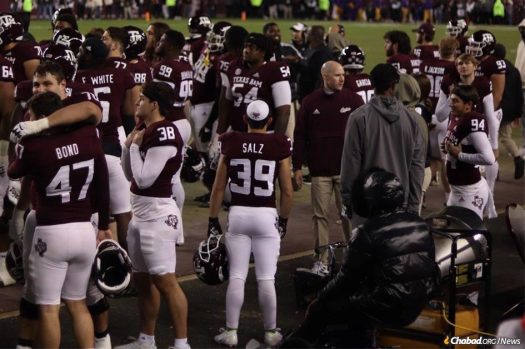 Sam Salz of Texas A&M chose 39 as a reminder of the lamed tet melachot, the 39 categories of work that are forbidden on Shabbat.

When college sophomore Sam Salz runs out onto the football field, he does so wearing a kippah and with the No. 39 emblazoned on the back of his jersey. He chose 39 as a reminder of the lamed tet melachot, the 39 categories of work that are forbidden on Shabbat.

Salz, a running back on Texas A&M University’s football team, is believed to be only the second Shabbat-observant NCAA Division I football player in history, and the first in about 15 years.

Off the field, Salz is an active participant at Chabad-Lubavitch at Texas A&M, where he attends morning services, Torah classes and Shabbat dinners. He is also a fellow at Chabad’s Sinai Scholars program, and last year attended Pegisha, the Chabad of Campus International Shabbaton.

Once, when a friend of his went to the Ohel, the resting place of the Rebbe, Rabbi Menachem M. Schneerson, of righteous memory, Salz wrote a letter to the Rebbe that expressed how he wanted to help others to be proud of who they are as Jews and to show how Judaism can propel a person forward, not hold them back.

“I just asked to get extra brachas (blessings) so that I could be an inspiration in this way,” Salz says

“He really instills Jewish pride in other students,” says Rabbi Yossi Lazaroff, who directs the Chabad at Texas A&M University with his wife, Manya. “They see someone like him who is very much into his athletics and his classes, but at the same time, is proudly Jewish, always wearing a yarmulke and tzitzit.”

As an observant Jew, Salz’s football experience is a bit different than how it is for most of the players. He keeps a Chumash and a volume of the Talmud in his locker. As a running back on the scout team, which acts as the opponents during practices, Salz doesn’t travel for away games, but scout team members do attend home games, during which they have an opportunity to run onto the field during halftime. When games fall on Saturday nights, he spends part of the games in the players’ lounge, studying Torah and reciting Maariv, the evening prayer, then runs out to the game.

“Because of kids like Sam walking strong and walking proud, another kid will walk on stage at their graduation wearing a kippah,” says Manya Lazaroff. “Another young man could put on tefillin at the heart of campus and be OK with it.”

Active in Jewish Programs on Campus

Salz grew up in Philadelphia, where he had his bar mitzvah at Chabad’s Congregation B’nai Abraham, was involved in CTeens and went to Kohelet Yeshiva, an Orthodox day school in Merion Station, Pa.

He says it was only natural that when he got to Texas, he would get involved with Chabad on Campus. “Our mission is to give Sam the support he needs to stay true to his Jewish values while pursuing his dream, and he appreciates that,” says Manya Lazaroff.

“We are very blessed that Sam is a part of the family,” she continues. “My kids know him. He makes sure the weekly minyans happen. He learns with other students. I have a cute video clip of him sitting around the kitchen table at Chabad just studying Talmud with a kid who never studied Talmud before.”

One person whom Salz has inspired is Brendan Rippner, a 22-year-old Texas A&M event coordinator who met Salz through Chabad earlier this year.

Salz and Rippner, who had played football in high school, made an agreement to help each other out. Salz would help Rippner become more in touch with his Judaism, and Rippner would teach Salz everything he knew about the game.

Rippner would answer Salz’s questions about football and join him in practices. Meanwhile, Salz would head to Rippner’s office a few times a week so they could wrap tefillin together.

“He would just keep coming, and we would wrap tefillin over and over and over again,” said Rippner. “All it did was just strengthen my neshama (soul).”

Rippner now puts on tefillin every day on his own.

Partway through the current semester, the opportunity arose for Salz to join the football team. However, the first practice he was supposed to attend was during Yom Kippur.

“Right off the bat, I had to explain that I wasn’t going to be able to be at the first practice because it’s Yom Kippur, and they were fine with it,” Salz says.