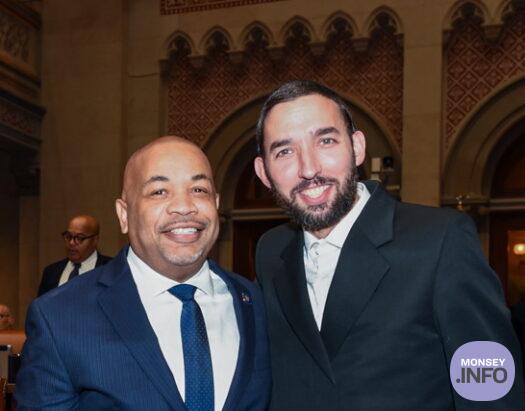 Assembly Speaker Carl Heastie with newly appointed Assistant Majority Whip Simcha Eichenstein on the Floor of the NYS Assembly during the first day of the 2023 legislative session.

On the first day of the 2023 legislative session, NYS Assembly Speaker Carl Heastie announced the appointment of Assemblyman Simcha Eichenstein as the new Assistant Majority Whip of the New York State Assembly.

“I am proud to have appointed Assemblymember Simcha Eichenstein to serve as Assistant Majority Whip for the Assembly Majority,” said Assembly Speaker Carl Heastie. “He is a valued member of the Assembly and will be an asset to our leadership team. It is critical to me that our team be representative of the communities we serve, and I look forward to working with Assemblymember Eichenstein to lead New York forward in the term ahead.”

As Assistant Majority Whip, Assemblyman Eichenstein will focus on bringing together our diverse and multifaceted communities throughout New York State.

“I am honored to have been appointed as Assistant Majority Whip and want to thank Speaker Heastie for entrusting me to carry out the duties inherent in this position,” said Assemblyman Simcha Eichenstein. “As always, I am committed to advocating for my constituents who have put their trust and faith in me by giving me the privilege of representing them in this great chamber. I will do my best to fulfill my responsibilities and will continue to work tirelessly on their behalf.”

Assemblyman Eichenstein continued, “I am committed to working together with all members of the State Assembly to ensure a better and brighter future for all New Yorkers. Only by working together as a unified force can we successfully accomplish our goals for the people of this great state. Together we can achieve greatness.”