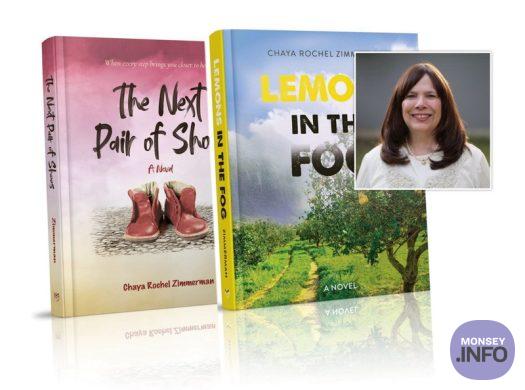 Chaya Rochel Zimmerman was born and raised in Staten Island, NY. Graduating Bais Rivkah Seminary in Crown Heights before earned degrees from Brooklyn College and the University of Maryland in Education and Math, Chaya took her experiences in raising a large family combined with her communal involvement, to reach out with an important message for the frum community: you are not alone in your struggles.

Her passion for writing arose from a combination of her love of reading and her desire to help others, so “Lemons in the Fog” and “The Next Pair Of Shoes” were born.

Lemons in the Fog

“…an important, hopeful story that raises much-needed awareness.”
Miriam Ament, Founder and President, No Shame On U

Lemons in the Fog is the eye-opening story of a Yeshiva student facing the onset of mental illness and the ensuing confusion and stigma surrounding the diagnosis.

Meir Rosen experiences his first manic episode while attending post-high-school Yeshiva in Israel. Meir, a good student who is careful to follow the rules of the Yeshiva, finds himself awake in the middle of the night dancing ecstatically in the study hall. Has a dybbuk taken over his body?

Several evenings later Meir suddenly finds himself in a comatose-like state. He struggles to act normally, but his behavior becomes frightening to the other Yeshiva students as well as the faculty. Psychiatric hospital staff arrive and are forced to tie Meir down to transport him to a hospital.

Sent home, Meir is torn between accepting his diagnosis and protecting his family’s reputation. His struggle to regain stability is compounded by the secrecy and the brick wall of stigma in the Orthodox
Jewish community, when he needs the support the most.

Through Zimmerman’s sensitive, detailed descriptions, she sheds light on the inner world of someone experiencing a mental diagnosis. We follow Rosen from his first ordeal in an emergency psychiatric ward, to a rehabilitation center, followed by his uneven journey back to health after his discharge. Zimmerman provides insight into how a person with mental illness gradually redefines their world, enabling them to ease back into society as a productive, positive member.

Lemons in the Fog is a groundbreaking novel and will significantly contribute to raising awareness about mental illness, specifically in the Orthodox community, though it also has broader applications for other insular cultural groups.

Lemons in the Fog can be purchased Here.

The Next Pair of Shoes

With emunah and determination, the young couple makes one difficult decision after another, forging on despite their pain and loyalty to their homeland.

In The Next Pair of Shoes, a heartwarming historical novel based on a true story, talented author Chaya Rochel Zimmerman takes readers on a compelling journey through the early 1900s — from a close-knit Polish shtetl to the lush, grassy farmland of Argentina; from the crowded tenements of downtown Chicago to the hustle and bustle of New York’s Lower East Side.

Experience the conflict of cultures from both sides of the ocean as you step into Froyim and Fraidel Leah’s shoes as they struggle to build a brighter future, one footstep at a time.

The Next pair of Shoes can be purchased Here.