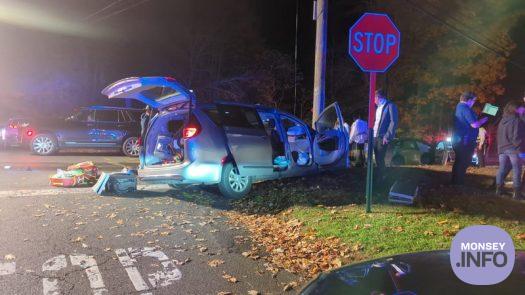 Initial reports on the crash say that the incident took place around 9:30pm at Camp Hill Rd and Ladentown Rd in the village of Pomona.

While the details of the incident have not yet been released, images from the scene show a minivan that appears to have crashed into a pole, causing severe damage to the car and splitting the pole. A second sedan vehicle, with decals from Berry’s Car Service, also has significant damage to the front of the car.

Update: According to reports, the person who passed away has been identiofied as Sruly Beck OBM, a Bobover Chossid from Boro Park who was wheelchair bound. Hatzalah of Rockland transported him to the hospital, but was unable to save him.