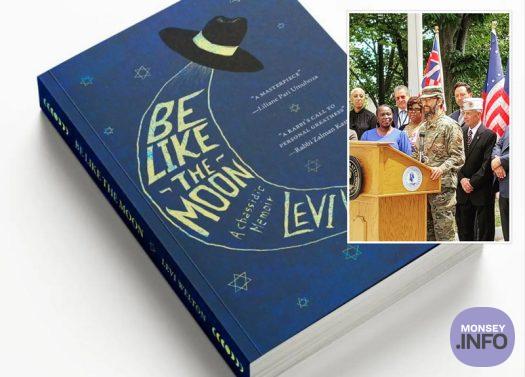 There are plenty of books and even some films out there chronicling the negative aspects of Hasidic life and those who have turned their backs on it.

In what may be a first of its kind, Rabbi Levi Welton’s new book – Be like the Moon, A Chassidic Memoire – gives the other side of that story.

A Brooklyn native raised in the San Francisco Bay Area, Welton says he’s most gratified that his story provides a chance “to represent my Chassidic American community to mainstream Americans with a positive and life-affirming message.”

Growing up in “in the radical shtetl of Berzerkeley” from the age of 3, Welton, now a United States Air Force chaplain, introduces readers to the community of eccentric, colorful, and endearing characters who became his heroes and teachers.

In vignettes ranging from his Boy Scout days adopting snakes and a chicken named “Fwedwicka” to life secrets learned from a hippie in the Wyoming wilds, Welton approaches his memoir with a nothing-is-off-limits attitude, facing head-on difficult topics like feminism, depression, addiction, death and “even a walk on the (atheistic) wild side.”

“This is the first-of-its-kind Chassidic memoir that details the positive and universally relevant values I received while growing up in an Ultra-Orthodox home,” Welton says. “Not only do I not bash my Chassidic upbringing, I celebrate it, while detailing the heroes who taught me life wisdom which I believe can uplift others outside my own community, and even my country.”

Compare your own struggles with modern life to his, and learn how the young rabbi wound up Chassidic and Proud.