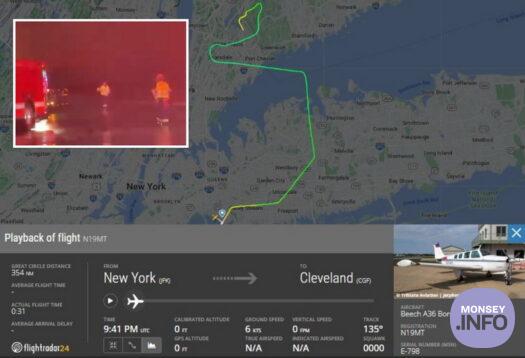 BDE: Small Plane With Jewish People On Board Crashes Near Westchester Airport

Terrible news has surfaced Thursday night with reports from the FAA that a small plane that took off from JFK crashed near Westchester Airport. Two Jewish men were allegedly on board.

The single-engine Beechcraft A36 had taken off at around 5:00pm and reported engine trouble around 5:25pm, losing radio contact soon after. The plane was initially heading to the Cleveland, OH area.

Police and rescue services were out in force searching for the downed plane, and according to initial reports, the search was narrowed to the area of Ray Lake.

The identities of those on the plane have not been released, but it is reported that two of the passengers were Jewish.

Update 9:05pm: Names For Tehillim are;

Update 10:00pm: (This information has been corrected)

Update 10:24pm: The search has reportedly been narrowed down to a heavily wooded area in the rear of an office building on King St (Rt120) in Armonk. Torrential downpours, thunder & lightning are hampering the search.

Update 10:50pm: Following an earlier mistaken update, it has been confirmed that there were only two people on board the plane at the time of the incident. One passenger and a pilot.

Update 11:05pm: Sources at the site indicate that the planes exact location has been identified.

Update 11:15pm: With great sadness we report that the two occupants of the aircraft have been located deceased.

Boruch Taub OBM, owner of MasterWorks Automotive & Transmission, was the pilot of the Beechcraft Bonanza a36, a single engine propeller plane. He is an experienced pilot and flew the plane often. Ben Chafetz OBM, a tech entrepreneur, was his only passenger on the flight.