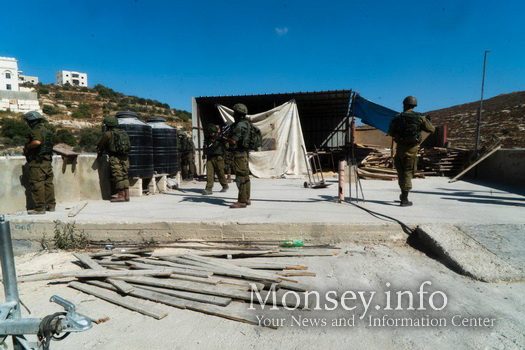 IDF soldiers from the Kfir Brigade’s Shimshon Battalion on Friday afternoon foiled a ramming attack near the Palestinian Authority-controlled city of Ramallah.

The attempted attack occurred during a road security operation near the Meir Spring, between Neve Tzuf and Nabi Salih.

The terrorist, a 39-year-old Palestinian Authority Arab, was eliminated. None of the soldiers were injured.

A short while later, riots broke out in Nabi Salih, near the scene of the attack. IDF forces distanced the protesters who were attempting to harm vehicles by throwing rocks.

Earlier this week, a 30-year-old resident of one of Jerusalem’s Arab neighborhoods attempted to stab a Border Police officer in the city’s Jabel Mukaber neighborhood. An investigation of the event showed that the terrorist, armed with a knife and pepper spray, arrived at the force’s post between Jabel Mukaber and Armon Hanetziv, where he attempted to spray the officers and stab them. The officers responded by firing at the terrorist, who sustained serious injuries and was transferred to the city’s Shaare Zedek Medical Center.

That same day, two terrorists attempted to stab IDF soldiers operating near Amichai in the Binyamin Region. The soldiers responded by firing at the terrorists, neutralizing them.