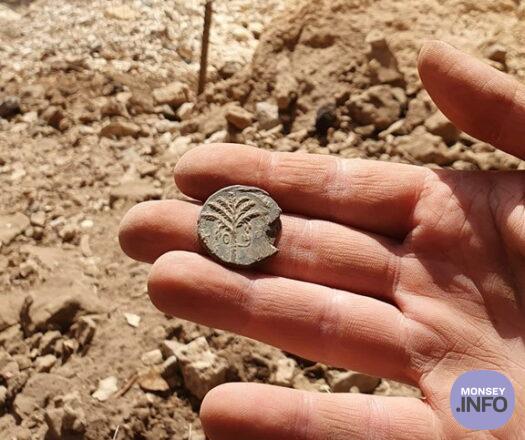 Did you know that this fine bronze coin, dating from the second year of the Bar Kochba Revolt (133 CE), was discovered in the Israel Antiquities Authority archaeological excavations carried out with the help of volunteers in four caves in the Nahal Darga Nature Reserve?

On one side of the coin, a date palm is depicted with the name ‘Shimon’ (Simon) written in ancient Hebrew script. Shimon Bar Koseba (Kochba) was the leader of the Second Jewish Revolt against the Romans (132–135 CE). On the other side, an inscription around a vine leaf reads: “Year Two of the Freedom of Israel.”

These Jewish coins were minted by the Bar Kochba administration, who restruck them by erasing the images on the Roman coins and reusing the raw material of the coins. The main purpose of minting these coins was to boost the morale of the Jewish rebels and to exhibit defiance against Roman rule. The coins featured a date palm, erasing the image of the Roman emperor that may still have been just visible on the original coins.

The excavation was carried out by archaeologists, members of the Israel Antiquities Authority Theft Prevention Unit, hundreds of volunteers from the general public, and youth participating in the ‘Ein Perat pre-army program. According to Amir Ganor, the Israel Antiquities Authority director of the excavation, “This coin is not the only discovery attributed to the Jewish rebels that were retrieved in the current excavation; remains of unique textiles and fabrics in various colors were also found.”

The excavation at Murabba’at Cave II yielded important and valuable artifacts from several historical periods, but the most prominent period represented in the cave is that of the Bar Kochba Revolt. Already in 1951, a collection of papyri belonging to Bar Kochba’s administrative archive was found in the cave, including the full name of the leader of the revolt, Shimon ben Koseba (Bar Kochba). Additional excavations at the site may reveal whether this cave served as Bar Kochba’s headquarters during the revolt that centered on the area of the Judean Desert.