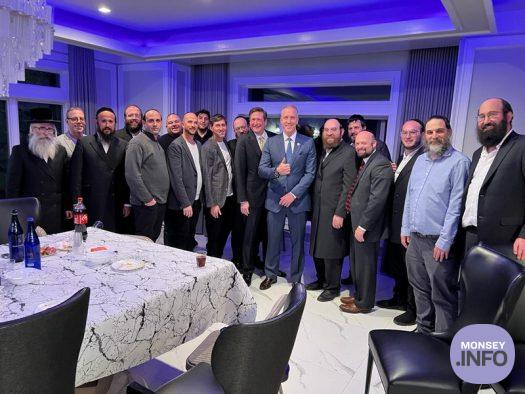 With election day around the corner elected officials from across our community gathered in the home of Mr. and Mrs. Galandauer in Pomona to meet with the incumbent Congressman Sean Patrick Maloney. In attendance were the supervisor of Ramapo, the Mayors of Kaser, New square, New Hempstead and Wesley hills, Rockland County Legislators, Town council members, Deputy Mayors, Trustees, organization heads and community activists.

Mayor Izzy Spitzer from New square was the first to speak and shared his experiences with the congressman over the last decade (before Rockland County was in his district) the congressman always had an open door and never hesitated to help out with the needs of our community.

Rabbi Moshe Margareten of Tzedek Association expressed his heartfelt and emotional gratitude to the Congressman for all his efforts over the years for Pidyon Shvuyim. He shared that the congressman was willing and an eager supporter of the bills and initiatives from BETZEDEK and often took a leadership role in helping garner support in congress and even bringing together Republicans and Democrats with a bipartisan effort for the release of prisoners including on more then one occasion within our community.

Matt McNally, the chief of staff to the congressman discussed opportunities that the office can help with constituent services. He spoke about his experiences of working with our community in his capacity as chief of staff to the congressman and told everyone in attendance not to hesitate to reach out, nothing is too small or unimportant! He shared the contact information for the office along with his personal cell phone number.

Congressman Maloney then addressed the room. He talked about his experiences of the last decade. He emphasized his deep respect for our traditions and values, how he understands and values our community and way of life. He then passionately announced that he will continue to fight for every parent right to make the decision for their children’s education and to choose the path that they want to raise them (the room erupted with a standing ovation). He then committed to bringing infrastructure funding for the growing needs of our community including and not limited to Sidewalks, parks, utility upgrades and roadways. The congressman pledged to work hard for our community and his constituents, and he emphasized don’t take me for my word look at my record! He also shared a message from the president who called him earlier in the day to express his satisfaction for the great support of the congressman and asking for your continued support. He completed his remarks by asking everybody to make sure they go out to vote and to encourage their friends and family to vote on Tuesday Nov 8, 2022.