« Is There a G-d? Who Needs G-d? By world famous lecturer, Rabbi YY Jacobson
Netanyahu Nominated for the Nobel Peace Prize » 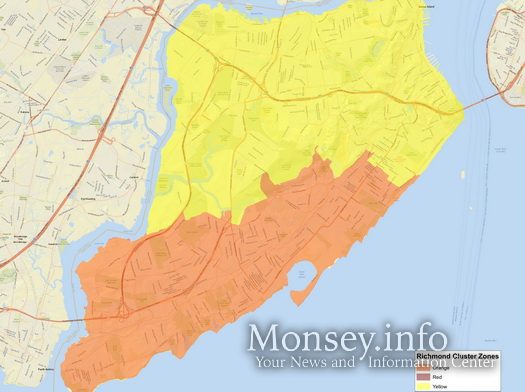 The Governor also announced that South Beach Psychiatric Center, a new but unopened Office of Mental Health facility on Staten Island, will at the request of the local hospitals be opening as a temporary emergency facility for COVID patients. The facility served as an emergency hospital in the Spring, providing care for COVID patients.

“We need a reality check because these are dangerous times that we’re in. The COVID rate, number of deaths, number of hospitalizations, everything we watch all day on TV, is all a function of our actions. There is no predetermined result here. You tell me what New Yorkers do today, I will tell you the infection rate tomorrow. We are in a place now where there is a bad synergy — a sense of COVID fatigue. Yes, we’re only at 3 percent and only Vermont, Maine, and Hawaii are lower than us, but that can change in an instant and we must remember how we got here,” Governor Cuomo said. “It’s the infection rate in your community that matters, and that’s why we talk about micro-clusters. Influence your family’s behavior and your community’s behavior and be a COVID change agent in your community. We’re social beings and it’s also the high season of social activity. That is a bad combination, and it is always the combination of events that creates the major issues. Now, Upper Manhattan, basically the Washington Heights area, will become a yellow zone. We’re also adding additional yellow zones on Long Island. Parts of Onondaga and Monroe Counties will become orange zones. Staten Island, part is a yellow zone, part is an orange zone. This year, let’s think of Thanksgiving as a time to yes, really give thanks to the people who really did phenomenal things this year, and continue to thank them by doing our part and wearing masks, staying socially distant, and practicing safe behaviors.”

Parts of Staten Island will transition to an orange warning zone based on increasing 7-day positivity rates, number of cases, and hospitalizations that meet the metrics for orange warning zone designation. The remainder of the borough will remain in a yellow precautionary zone.

A new yellow zone will be established in the Washington Heights area, after meeting the metrics for yellow precautionary zone designation including on increasing 7-day positivity rates, number of cases, and hospitalizations.

The City of Rochester and surrounding areas will transition to an orange zone after meeting the positivity, new cases, and hospitalizations metrics for orange zone designation. The rest of the existing yellow zone will remain a Precautionary yellow zone.

Yellow Precautionary zones will be established in and around Great Neck and Massapequa Park, after both areas have seen sustained positivity, new case rates, and hospitalizations that meet the metrics for yellow precautionary zone designation.

The City of Syracuse and surrounding areas will transition to an orange precautionary zone after seeing continued increases in positivity and number of cases, as well as hospitalizations. The existing yellow zone will remain a yellow precautionary zone, and parts of it will be expanded.

Parts of Suffolk County including Hampton Bays and Riverhead will be designated as Precautionary Yellow Zones after meeting the positivity, new cases, and new hospitalization metrics for yellow zone designation.

« Is There a G-d? Who Needs G-d? By world famous lecturer, Rabbi YY Jacobson
Netanyahu Nominated for the Nobel Peace Prize »