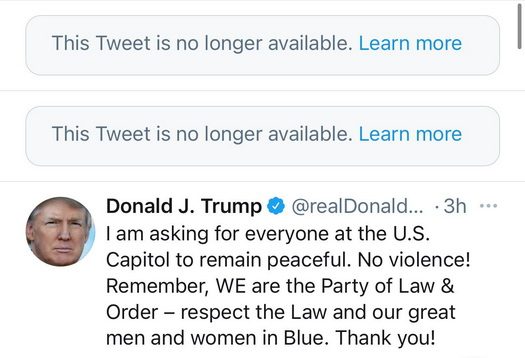 Twitter has joined YouTube and other social media platforms in removing posts from President Trump calling for calm in the capital during the protests in Washington DC today.

The unfathomable move marks the first time Twitter has removed a tweet from the President, one of which included a video in which the President told the protesters to go home, and that he feels their pain.

After the President had initially posted the video, Twitter slapped the tweet with a restriction not allowing for the tweet to be shared or retweeted, giving the reason that it may incite violence.

While the platform does in fact have the right to police what they allow to be posted, such censorship has already triggered many questions on the rule of free speech, and if such censorship is good or bad.