« Biden: US Will Have Enough COVID Vaccines for Every Adult by the ‘End of May’
Failed Scammer Sends Fax Scam To Police Department » 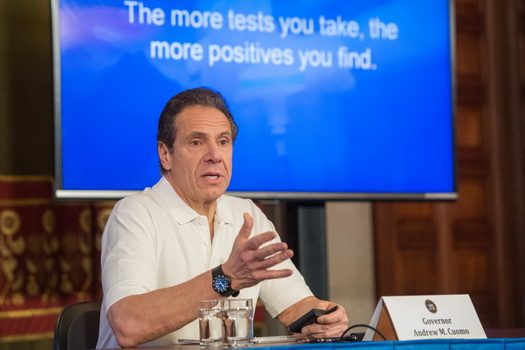 The New York state Legislature has agreed on legislation repealing the temporary emergency powers that were granted to Gov. Andrew Cuomo last year at the start of the COVID-19 pandemic, Senate Majority Leader Andrea Stewart-Cousins and Assembly Speaker Carl Heastie announced Tuesday, a year and a day after the first New Yorker was confirmed to have the coronavirus, and as Cuomo’s future as governor is in doubt as he battles twin scandals.

At the start of the pandemic, legislation was passed to give the governor powers to respond to the emergency through executive orders. These temporary emergency powers were set to expire on April 30, but the legislation announced Tuesday would repeal the powers immediately, while allowing current directives critical to public health to continue.

Tuesday’s announcement comes as Cuomo is under fire from significant twin scandals: his handling of nursing homes, which saw over 15,000 pandemic-related deaths; and allegations of misconduct by three women.

“The public deserves to have checks and balances,” said Stewart-Cousins. “Our proposal would create a system with increased input while at the same time ensuring New Yorkers continue to be protected.”

Under the bill, previous executive orders related to COVID will remain in effect for an additional 30 days. The governor could then extend or modify them if he notifies leaders in the Legislature, provides them an opportunity to comment, and responds to their comments. In instances where a municipality is exclusively impacted by an executive action, that local government’s leadership will also receive notice, and have an opportunity to comment.

Assemblywoman Carrie Woerner tweeted that the bill would also “restore the right of counties and municipalities to issue executive orders without seeking state approval.”

Critics of the governor — which, in recent days, appears to be just about everyone — hailed Tuesday’s announcement.

“This long awaited legislation is a [welcome] first step towards holding the governor accountable,” tweeted Assemblyman Simcha Eichenstein (D-Brooklyn). “With the worst of the pandemic hopefully behind us, it’s high time that we return to our system of checks and balances for the benefit of all New Yorkers.”

Sen. Anna Kaplan (D-Nassau County) said in a statement, “We’ve come a long way from those dark days last spring when the COVID-19 pandemic shut down our state and created new challenges that impeded the ability of the Legislature to respond quickly to the rapidly evolving emergency situation. It’s critical that we continue to have the tools necessary to respond quickly and effectively as we battle COVID in our community, but moving forward, we can and should have better oversight of the process.”

The Cuomo Administration did not immediately respond to Hamodia’s request for comment on the bill announcement. Cuomo has not held a press conference in more than a week.

« Biden: US Will Have Enough COVID Vaccines for Every Adult by the ‘End of May’
Failed Scammer Sends Fax Scam To Police Department »