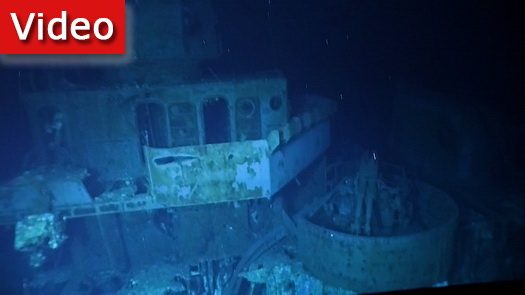 The USS Johnston, captained by Ernest Evans – the first Native American in the Navy to be awarded the Medal of Honor, was sunk during World War II while in combat by multiple Japanese Vessels. For the first time since it disappeared below the waves, we received a full view of the sunken ship.

It's been so wonderful to share the story of the USS Johnston with so many people. Her crew and Captain, Ernest Evans – the first Native American in the Navy to be awarded the Medal of Honor, were extraordinarily heroic. Here's video from the dive and the bridge they fought from. pic.twitter.com/rAfEh78VJv

Just completed the deepest wreck dive in history, to find the main wreckage of the destroyer USS Johnston. We located the front 2/3 of the ship, upright and intact, at a depth of 6456 meters. Three of us across two dives surveyed the vessel and gave respects to her brave crew. pic.twitter.com/N1AuzHIi0b