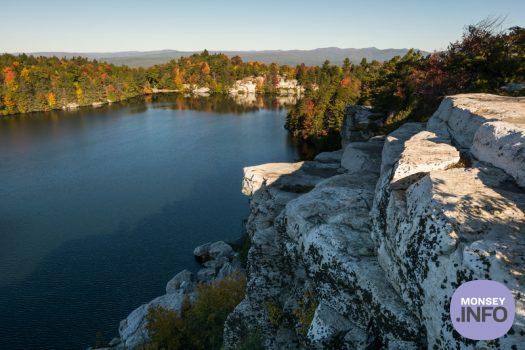 INBOX: Six Years Ago, My Son Also Fell Off A Cliff

This letter was sent to CrownHeights.info following the news of a Lubavitch woman’s miracle at Niagara Falls where she fell down a more than 50-foot cliff and survived. The story, along with a voice recording of the incident from the lady herself, can be found here.

I would like to thank the woman for telling her nes. My son had a very similar miracle six years ago when he was nine. He fell off a 50-100 ft cliff in Minnewaska State Park in New York. (Also some machloket about how far he fell).

Some young men found their way down at another part that was not sheer cliff. They were able to find him because his bright yellow hat was nearby. He was found between two huge boulders. The entire ground around him was huge rocks. One of the young men who found him came up crying and told us our son was breathing.

The Rangers brought him up on a stretcher and intubated him before putting him on the helicopter. In the meantime, we were on top of the cliff saying Tehillim.

He was in Westchester hospital for six days in a coma. BH he woke up on Shabbos Rosh Chodesh Elul. He has no memory of the entire day of the fall. Or the early days in the hospital when he first woke up.

I hope he will listen to her telling her miracle and feel more of a connection to his own miracle. B”H we go back every year and the rangers are so emotional and happy to see he is alive and well. We have kept in touch with the boy and his family who found him. BH my sister thought to ask them for their number.

So many miracles and so many ppl helping us. Actually our Chabad neighbor from Staten Island had moved to the area near Westchester Hospital. He brought us food while we were there that his wife especially cooked for us with our special dietary concerns. He spent time with us and gave his dollar from the Rebbe and his Tanya that we still cherish. He wouldn’t take it back when we B”H left the hospital.

We know that Hashem sent Michael, Gavriel, Uriel, and Rafael to escort him on the way down. We are blessed to have all our children and hope that Yehoshua can appreciate more the miracle that happened to him that he has no recollection of after listening to your account.

You should be zoche to live a long and healthy and happy life together with your husband and all of your children and grandchildren and greats. So happy to hear you and the baby are well.