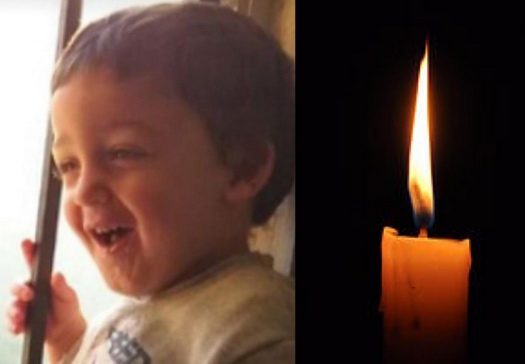 Elad Frizat, 3, passed away Saturday in a Tzfat fire.

The fire, which was brought under control, broke out in a residential building on the city’s David Elazar Street. Frizat was transferred to the city’s Ziv Medical Center in critical condition, as paramedics performed CPR. He was later declared dead.

The fire injured eighteen others, including a 4-year-old boy who suffered burns and a 14-year-old girl who was having difficulty breathing. The other victims suffered from smoke inhalation.

“Among those injured are residents who were taken to the roof by police officers in order to distance them from the source of the fire,” a police source said. “They were later evacuated by and in coordination with firefighters.”

The dead toddler’s mother said they were surprised when a fire appeared in the apartment, since there were no electrical appliances which could have caused a short.

“Despite the medical staff’s hour-long attempt to revive the 3.5 year old boy, doctors were forced to declare his death. We share the family’s sorrow. Medical staff and a social worker are with them,” a hospital statement read.

“When we arrived at the scene we saw thick smoke coming from the building’s windows and a lot of chaos in the street. We immediately joined the firefighters, who brought the injured out to us,” Magen David Adom paramedics Zohar FIrgun and Oren Ne’eman said.

“Near the entrance of the building, they passed us a toddler of about two years old, who suffered burns and was unconscious due to smoke inhalation. We immediately began providing life-saving medical treatment and performing CPR, and we transferred him to the city’s Ziv Hospital while performing chest compressions and artifical ventilation, as well as using special medications for his critical condition.”

Senior paramedic Yehuda Haim added, “At the scene there was a lot of chaos, firefighters were working to extinguish the fire and evacuate the injured who were trapped in the building’s burning apartments. We were prepared outside the building, with stretchers and life-saving equipment, and we received the injured, who suffered mostly from smoke inhalation. We performed medical examinations of all the injured, providing them with initial medical treatment, including oxygen, in order to avoid exacerbation of the symptoms of smoke inhalation, and we transferred them to the hospital in stable condition.”