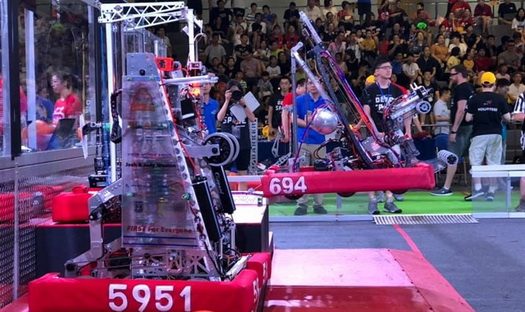 The robotics team of the Tichonet high school of Tel Aviv returned to Israel on Monday from China after winning first place in an international robotics competition, beating teams from countries around the world.

Arutz Sheva spoke with the team’s mentor, Raanan De Haas who said the structure of the competition in China dictated that after the preliminary stage, every four teams converged into one team that competed from the quarter-finals to the final itself. The Israeli team joined the New York, China and Hawaii teams and achieved first place.

“Every year there is a new mission, a new challenge to build a robot. This year, the goal was to target discs in different places on the field,” De Haas said, adding that each robot had to protect its own discs as well as attack the discs of the other robots. “For us, the defense was better than the attack,” De Haas admitted.

“We learned a lot from the Chinese groups and part of our job was to teach,” De Haas said. “Three days before the competition we adopted a new group from China and passed on our knowledge to them,” he said, adding that they spoke together in English with the help of hand gestures.