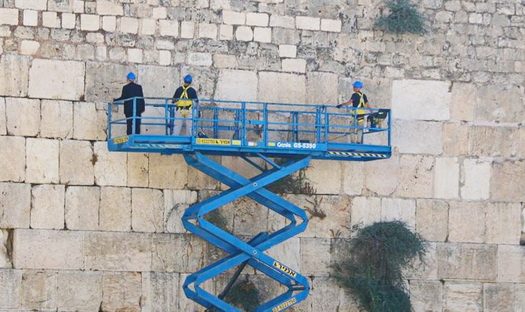 Beginning with Rosh Hashannah at the end of September and continuing through the Sukkot festival in late October, hundreds of thousands of visitors are expected at the Western Wall Plaza.

On Tuesday, workers inspected the stones of the Western Wall, to ensure that no stones had become loose since the last inspection.

In addition, the workers cleaned out the crevices on the outside of the Wall from birds’ nests and various objects carried by birds.

The cleaning and inspection operation is carried out twice a year by the Western Wall Heritage Foundation – once ahead of the High Holidays in the fall, and once prior to the Passover festival in spring.

Last year, a 400-pound stone fell from the Western Wall, landing in the mixed gender prayer plaza near Robinson’s Arch.