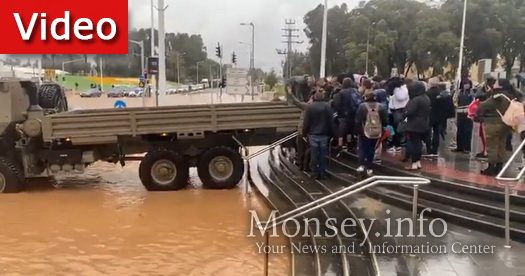 The recent heavy rainfall generated flooding from eastern rivers descending from the Judean Desert to the Dead Sea.

In the meantime, the rainstorms that started yesterday are expected to continue today and are foreseen to end tomorrow. Today, rainfall is present accompanied by thunderstorms, mainly in the north and central Israel. As a consequence of the increased rainfall this season, there is fear of coastal and lowland flooding and the Jordan Valley, Judean Desert, and the Dead Sea. Together with snowfall on Mount Hermon, it is colder than usual.

We are expecting tomorrow morning a continuation of rainfall and thunderstorms in most parts of the country. However, there is the concern of flooding in the southern and eastern ravines. After the night’s heavy downfall, during the day the rainfall will lighten up, but temperatures will be colder than usual for the season.

Saturday’s weather forecast currently shows it will range from partly cloudy to cloudy. Temperatures will slightly rise but still be colder than usual. Furthermore, north and central Israel will experience some slight rainfall with no change in temperatures.

Sunday’s weather forecast currently shows it will range from partly cloudy to cloudy with a chance of light rain in the north and central Israel. No change in temperatures.