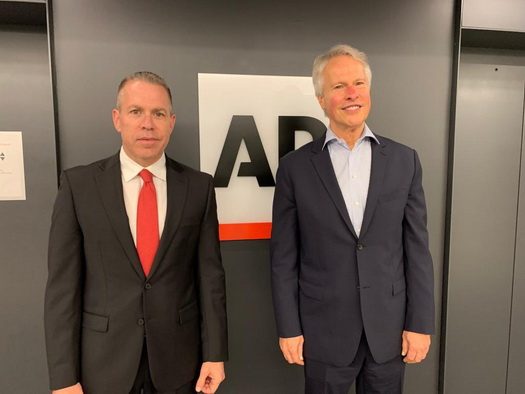 Israel’s Ambassador to the United Nations, Gilad Erdan, visited the headquarters of the Associated Press Monday and provided explosive evidence that the building housing their Gaza operation was being used by Hamas terrorists trying to jam the Iron Dome.

Erdan broke the news on Twitter saying “Yesterday, I visited the @AP HQ in New York to explain to top executives that the building housing their Gaza operation was being used by Hamas terrorists trying to jam the Iron Dome – that is why it was prioritize by the IDF during last month’s operation.”

The targeted destruction of the building brought headlines and condemnation for what many believed was a strike purely on members of the press.

“AP is one of the most important news agencies in the world and Israel does not suspect its employees were aware a covert Hamas unit was using the building in this way,” noted Erdan.

The widely viewed destruction of the building also went viral over a live stream showing the owner of the building pleading with Israeli authorities to spare the building for an additional few minutes to allow press teams to remove their equipment. Israel agreed and delayed the military demolition.

“I reaffirmed that Israel upholds the importance of press freedom and strives to ensure the safety of journalists wherever they are reporting,” said Erdan. “Israel is willing to assist AP in rebuilding its offices and operations in Gaza.”