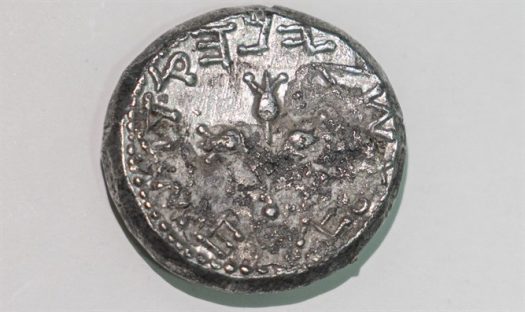 A shekel made of pure silver that was used for trade in Jerusalem about 2,000 years ago, during the Second Temple period, was discovered in Jerusalem by an 11-year-old girl.

The coin weighs about 14 grams. On one side is an inscription of a cup with the caption: “Israeli shekel” and next to the cup are the letters: ש”ב – shorthand for “second year” – the second year of the Great Revolt of the Jews against the Romans (67-68 CE). On the other side of the coin is an inscription identified by scholars as the headquarters of the High Priest, and next to it appears in ancient Hebrew script the words: “Holy Jerusalem.”

According to Dr. Robert Kool, Head of the Coin Department of the Israel Antiquities Authority, “This is a rare find, since out of many thousands of coins discovered to date in archeological excavations, only about 30 coins are coins made of silver, from the period of the Great Revolt.”