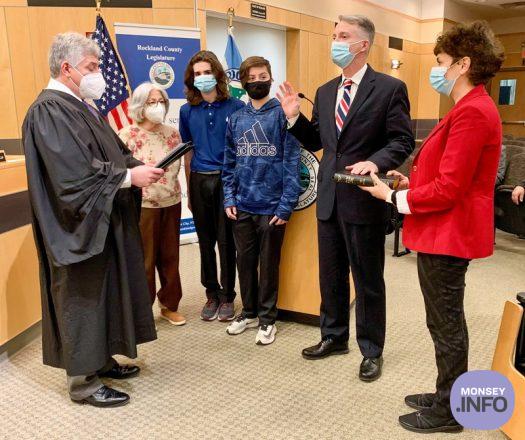 I am honored and humbled to be able to serve as Chairman of the Rockland County Legislature,” Chairman Hood said. “It may not be as powerful a position as people think – I am still only one vote on any matter that comes before us. But I am ready to be the face of the body and to work with my Democratic and Republican colleagues, as well as the Administration, to make Rockland County the best it can be.”

Also an attorney in private practice, Hood earned a Bachelor of Science degree in Mathematics from St. Bonaventure University and is a graduate of Villanova School of Law. He and his wife, Julie Meyers, are parents of two sons, Avery and Quinlan. They and his mother, Kathy, joined him for the swearing-in ceremony, conducted by his long-time friend, Haverstraw Village Justice Honorable Ronald DeCaprio.

Chairman Hood said he liked to focus on the task at hand and get the job done.

“To quote the new New York City Mayor Adams, he likes to ‘GSD- Get Stuff Done,’” Chairman Hood said. “I like that because I feel the same way. When governing, I always try to keep politics to a minimum, work with everyone and get stuff done. That is what’s important to me.”

He outlined some of his goals for the coming year:

• Adopting a countywide Taxi Law to improve safety for riders and drivers. The law would also allow drivers from Rockland to pick up passengers in Westchester County without fear of getting a ticket, and vice-versa.

• Addressing the Sain building, whether it means demolishing the eyesore and finding a use for the property in the future, selling it, or finding some other use. Chairman Hood will help seat the Blue Ribbon Committee, created by then-Chairman Alden Wolfe upon the request of Legislator Lon Hofstein, that will make recommendations. Hood said it will include legislators, representatives of the County Executive’s office and stakeholders from Clarkstown, where the property sits.

• Working to ensure that the $63 million in American Rescue Plan funds slated for Rockland County are spent in the most effective ways to help residents and businesses. The ARP is a national economic relief package to address some of the financial stress caused by the pandemic.

• Conducting Redistricting in time for the next Legislative election in 2023. With the newest U.S. Census numbers, new district lines will have to be drawn due to changes in population increases or decreases around the county. All districts must have roughly the same population.Legislators also voted 16-0 to elect Legislator Paul as Vice Chairwoman for a third time. She was first elected in 2020 and previously served as Majority Leader. She was sworn in by Rockland County District Attorney Thomas Walsh.