« Woman Killed, Rabbi and 2 Others Wounded at Chabad of Poway
Two Prisoners Returned to Syria in Goodwill Gesture » 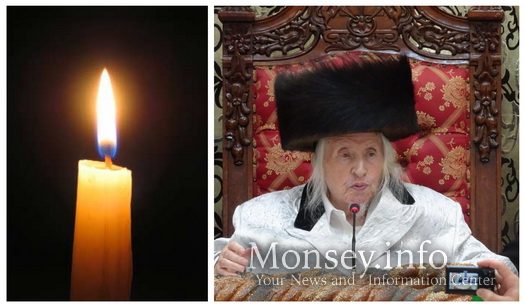 The Kaliver Rebbe, Rabbi Menachem Mendel Taub, the eldest of the “Admorim,” passed away Sunday afternoon at his home in Jerusalem after undergoing extensive resuscitation efforts.

About two weeks ago, the Rebbe tripped in his home and since then had been very weak and unable to leave his home.

Close associates of the 96-year-old Rebbe say that until a few weeks ago he functioned as usual, but before Passover, his medical condition deteriorated.

MDA Paramedics were summoned during the last hour to the Rebbe’s residence, and administered protracted CPR operations after he lost consciousness, but were forced to declare his passing.

A Holocaust survivor who suffered at the hands of the infamous SS officer Josef Mengele during his captivity in the Auschwitz concentration camp, the Rebbe later immigrated to the United States, gaining US citizenship before moving to Israel.

Active in Jewish outreach, the Rebbe was also known as one of the greatest commentators on the Holocaust and encouraged saying the Shema prayer in commemoration of martyrs of the Holocaust at the end of religious events.

One of the Rebbe’s hallmarks was the song Solo Kokos Mar (‘the rooster crows’ in Hungarian), a song passed on by the founder of the Kaliv dynasty, Reb Isaac Taub, who heard a shepherd singing it and changed it to an allegory about the longing for the Messiah..The Kaliver Rebbe would sing it at hassidic events and Holocaust memorials, incuding at the banks of the Danube, and listeners would join in the last line, sung in Hebrew, “May the Beit Hamikdash be rebuilt and the City of Zion filled with Jews.”.

Following President Trump’s recognition of Jerusalem as the capital of Israel, the Rebbe issued a special message in which he thanked Trump and urged him not to worry in the face of critics.

“President Trump, after God saved me from Auschwitz, they wanted to throw me in a fire. And I said to the Almighty, “Help me. Shema Yisrael, Hashem Elokeynu, Hashem Ehad” [Hear, O Israel, The Lord is our God, the Lord is One]. My God, let me live.

“After miracles upon miracles, the Almighty helped me… and I came to the United States. But then I said ‘I must come to Jerusalem.’

“I want to wish you from the depths of my heart that you should have great success. Don’t worry if people are talking bad about you. The Almighty is with you and He should help you and the world should know that the US helps everybody, anytime. Thank you very much and a lot of blessings to you.”

« Woman Killed, Rabbi and 2 Others Wounded at Chabad of Poway
Two Prisoners Returned to Syria in Goodwill Gesture »