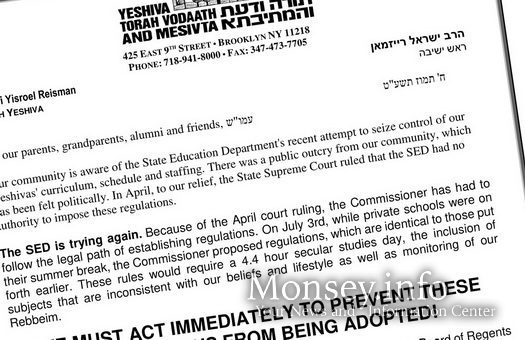 Rabbi Yisroel Reisman, Rosh Yeshiva at Yeshiva Torah Vodaath, released a letter to parents, grandparents, alumni and friends, asking them to join in and take action to protect the Yeshiva Education.

The letter is in response to proposed requirements that the Department of education is attempting to mandate, requiring specific hours dedicated to secular studies in private schools.

Rabbu Reisman writes, “On July 3rd, while private schools were on their summer break, the Commissioner proposed regulations, which are identical to those put forth earlier. These rules would require a 4.4 hour secular studies day, the inclusion of subjects that are inconsistent with our beliefs and lifestyle as well as monitoring of our Rebbeim.”

He continues by asking everyone to join a petition against the measure saying, “We will not be silenced. It is vitally important that all yeshiva parents and yeshiva graduates make their voices heard and submit their opposition.”