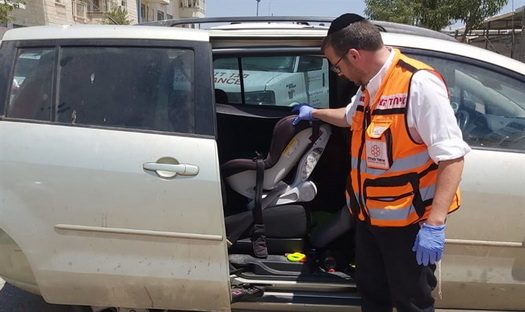 (Vehicle in which the child was found. Credit: United Hatzalah)

A six-month-old baby boy died Monday afternoon, after he was forgotten in a car in the city of Modiin Illit in central Israel.

The infant had apparently been forgotten in the car and discovered by family members sometime later.

MDA and United Hatzalah emergency first responders were called to the scene to treat the child after he had been taken out of the car.

Paramedics performed CPR on the child, who was unconscious and had no pulse and was not breathing after being rescued from the car.

After being treated at the scene, the child was evacuated by ambulance to Assaf Harofe Hospital, where he was declared dead.

United Hatzalah volunteer EMT Aharon Waldshine who was one of the first responders at the scene said: “According to family members, the infant who is approximately 6-months-old, was forgotten in the car sometime earlier this morning, and when they came back to the car this afternoon they discovered the child was without a pulse and not breathing. Together with other first responders at the scene, we attempted to resuscitate the child and the child was transported to the hospital in critical condition.”

United Hatzalah’s Psychtrauma and Crisis Response Unit was dispatched to help the family members cope with the emotional turmoil resulting from the incident.

“We ask that parents always follow the safety procedures regarding vehicles and infants in cars,” United Hatzalah said in a statement Monday.

“Never leave an infant or small child unattended in a car, not even for a second and always make sure that no one is left in a vehicle by themselves when leaving the car. It is recommended that pedestrians keep an eye out for children inside parked cars, especially during the hot summer months, and if you see something please call for emergency help in an effort to avoid tragedies from occurring.”