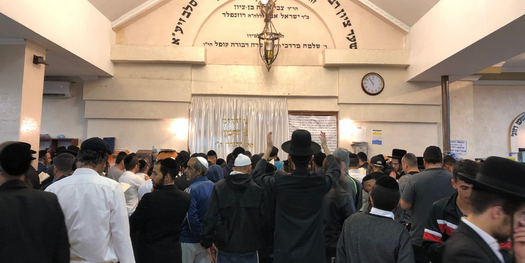 As tens of thousands of Jews from around the world converged upon Uman, Ukraine, for Rosh Hashanah, anti-corruption enforcement took place on the ground, a move that greatly pleased the US-based Orthodox Jewish Chamber of Commerce, which brought the issue to the forefront.

Employees of the local utility authority attempted to extort bribes from local Jewish vendors, demanding hundreds of dollars from each so that they could continue operating. Only this time – for the first time ever – they got arrested while doing so.

Officials with the Ukrainian national government’s SBU security service (similar to the FBI in the US) were in Uman to crack down on local corruption and harassment of Jewish worshippers and businesses. This follows an intense lobbying effort to President Volodomyr Zelensky, in which the Chamber exposed in great detail the rampant corruption in Uman and pleaded for intervention. Shortly before Rosh Hashanah, the President appointed a special commission to deal with the issues.

“The Chamber would like to thank President Zelensky and Ukrainian authorities for taking bold steps to end corruption and provide justice to Uman’s Jewish businesses, tourists and religious leaders,” says Duvi Honig, Founder and CEO of the Orthodox Jewish Chamber of Commerce.

“We will continue working with government officials and business leaders from around the world to promote and protect the interests of Jewish businesses and institutions to the mutual benefit of our community and society at large.”