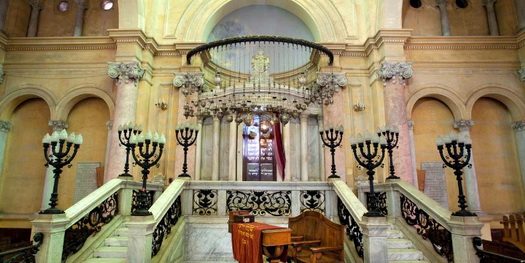 The Egyptian government reopened a historic synagogue in the city of Alexandria on Friday whose origins date back to the 14th century.

The Eliyahu HaNavi synagogue — located in the Mediterranean port city that was home to a Jewish community of more than 20,000 in the mid-20th century — had been undergoing a restoration process for the last three years.

Observing that the synagogue was dated “originally to 14C,” local journalist Farid Y. Farid recalled on Twitter that it was also “bombed during Napoleon’s invasion in 1798 & built on the same site during 1850s.”

Egyptian Antiquities Minister Khaled al-Anani and some 25 diplomats joined the leaders of the small Jewish communities of Alexandria and Cairo at Friday’s ceremony.

The renovations, which were funded by the Egyptian government, cost 68 million Egyptian pounds ($4.23 million).

The World Jewish Congress paid tribute to Egypt for preserving the culture of its once proud Jewish community.

“Egypt’s Jewish community today has fewer than 20 members,” the WJC noted on Twitter. “But the rich heritage of the Egyptian Jews is being preserved. In Alexandria, the Eliyahu Hanavi synagogue has been restored.”