« Four Rockets Launched from Gaza
Picture of the Day » 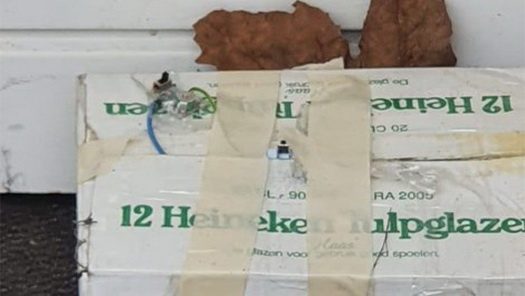 A box resembling a home-made bomb was left outside a Dutch kosher restaurant where several anti-Semitic attacks have occurred.

The cardboard box, bearing the logo of the Heineken beer brand, was found Wednesday morning outside the HaCarmel restaurant in southern Amsterdam. It had masking tape fastening wires and a black electric trigger switch to its top.

The police bomb disposal unit rushed to the scene to examine the device, according to the Twitter account of the Federatief Joods Nederland group. Police said on social media that they are examining the box. They did not say whether explosives were found inside.

In 2017, a 29-year-old man waving a Palestinian Liberation Organization flag smashed the windows of HaCarmel with a wooden club, stealing an Israeli flag hanging there. Police officers stood by as he vandalized the place but arrested the suspect when he came out.

The perpetrator, Saleh Ali, was a Syrian asylum seeker. He was convicted of vandalism after 52 days in jail while awaiting his trial. He was released with no additional penalty. Dutch Jews criticized the ruling because it did not contain a reference identifying his actions as a hate crime.

The restaurant in recent years has been the target of multiple incidents, including damage to the windows and the pelting of its façade with eggs.

Last year, the owner, Sami Bar-On, said he would have to close down unless police manage to curb the attacks on his business.

« Four Rockets Launched from Gaza
Picture of the Day »