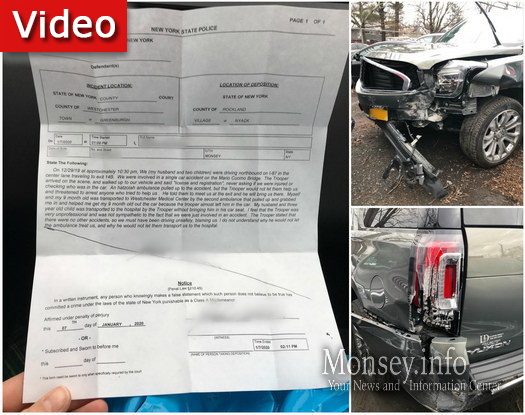 A family involved in a severe accident two weeks ago on the Mario Cuomo bridge says that a New York State trooper reacted antisemitically, ignoring their obvious injuries and threatening the volunteers of Rockland Hatzoloh for attempting to give aid.

The couple and their two children were driving northbound on the I-87 at about 10:30pm on Dec. 29th, the night of Zos Chanukah, when due to the rainy weather their car hydroplaned on a large puddle and slammed into the guardrail multiple times.

The car finally came to a complete stop, resting across multiple lanes, and refused to restart. the family waited inside the vehicle terrified that they would be struck by passing vehicles if they stepped outside.

The family had sustained significant injuries in the accident, and were in urgent need of medical attention. They made a call to Hatzoloh and 911, praying to stay safe while they waited.

Just moments before a Rockland Hatzoloh ambulance arrived, fully staffed with EMT’s and paramedics arrived, a state trooper pulled up to the scene.

The mother told Monsey.info that the officer then proceeded to callously ignore their injuries and distress, demanded to see the driver’s license and registration, and deciding to blame them for speeding and reckless driving, despite having no basis that this was a case.

When the Rockland Hatzoloh volunteers attempted to give aid to the family, the officer shockingly demanded that they return to their ambulance and leave the scene, threatened penalize any Hatzoloh member who attempted to offer assistance.

The officer, ignoring the screams of the obviously injured and bleeding mother, then removed the husband and the older 3-year-old child from the car, placing them in his vehicle so he could proceed to issue a ticket.

As this was taking place, the mother was outside the vehicle, desperately attempting to extricate her infant child from the rear seat of the vehicle.

A 911 ambulance finally arrived and immediately took the wife and infant child onto their ambulance, without protest from the officer.

Due to the severe accident, the ambulance rushed the pair to Westchester Medical Center for treatment, with the trooper following behind with the other family members.

The couple have filed a complaint against the officer with the New York State Police, detailing the ordeal. In the complaint, and they suggest that the trooper’s behavior was unprofessional and unsympathetic to the fact that they had just been involved in an accident. When Monsey.info reached out to the state authorities for comment, they replied that they were unaware of the incident, and would look into it.

Rockland Hatzoloh, in response to a request for comment, acknowledged that there was an incident with the state troopers at the time, but added that a meeting subsequently took place at which this was discussed, and an understanding was reached. They noted that they are confident that such an incident will not happen again.

Rockland Hatzoloh was involved just a few months ago in a similar incident involving a New Jersey State trooper, who also refused to allow them to treat the victim of a highway accident.