« Picture of the Day
Chassidim Stuck at the Ukraine Border, Chabad To The Rescue » 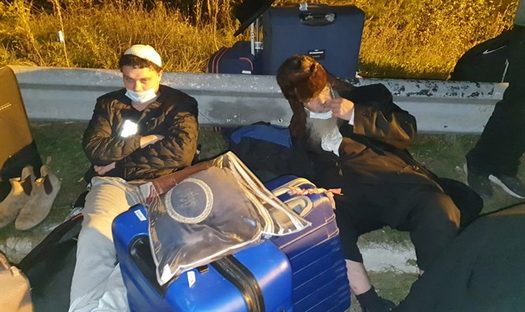 Roughly 2,500 members of the Breslov Hasidic movement who recently traveled to Eastern Europe hoping to spend the upcoming High Holidays in Uman, Ukraine are stock in Belarus, after being denied entry into Ukraine.

Some 1,000 of the Hasidim attempted to cross the border from Belarus into Ukraine after receiving a message which mistaken claimed that the frontier between the two countries had been opened – only to be receive entry by Ukrainian border agents.

Senior Breslov officials have called on the Israeli government to intervene on behalf of the travelers stuck at the border.

“The situation is nearing total chaos, with hundreds of not thousands of Israelis, including elderly people, women, and children, stuck in the middle of nowhere unable to enter any country. The food the public provided them with is running out, and it is a matter of minutes and hours before the situation goes completely out of control.”

« Picture of the Day
Chassidim Stuck at the Ukraine Border, Chabad To The Rescue »