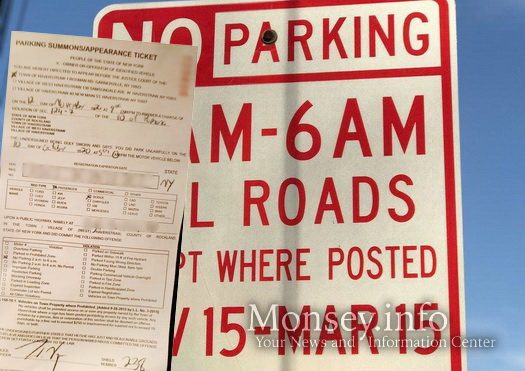 For the members of a Pomona Heights Shul, being ticketed wasn’t just a slap in the face, it was a double insult.

With COVID-19 a stark reality in Rockland County, the shul made its preparations for the last days of Yom Tov. An open-air tent, large sukkah, and extra precautions were put in place, all of these at the expense of the shuls few coveted parking spots.

With parking scarce, the congregants arriving for Mincha Erev Yom Tov parked their cars where they could, with approximately eight vehicles ended up parkeding on the street, including at least one Hatzoloh member’s vehicle.

The first shock came as members of the shul arrived for Shachris Shabbos morning to find that a Haverstraw Police Officer had ticketed the vehicles parked directly in front of the shul, but left a myriad of other vehicles parked across the nearby streets untouched.

The tickets were in fact summonses over a law that prohibits parking from 2:00am through 6:00am throughout the year, a law which the shuls congregants say they were unaware of.

“I know that there is a sign at the bottom of the hill that says that you can’t park overnight during the winter months,” one of the congregants told Monsey.info. “But that doesn’t start until next month.”

The second slap in the face came the following morning, when the congregants, who were unable to move the vehicles due to it being the second day of Yom Tov, found that their cars had been targeted again by the same police department, for the same violation. Cars just up the road though had no tickets.

The blatant targeting of the Jewish vehicles by the shul created jitters among the shul, due to the present political climate and surge in targeted antisemitism.

A call to the Haverstraw Police Department for comment was never returned.