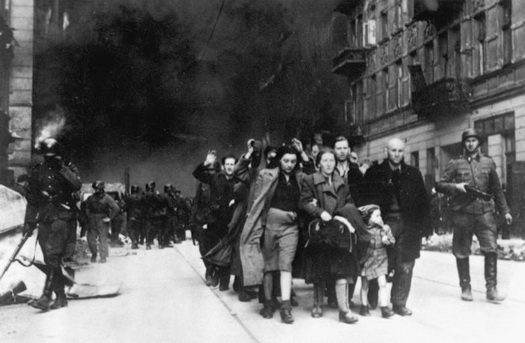 Dozens of pairs of tefillin (phylacteries) have been discovered hidden in a previously-undiscovered bunker in the Warsaw Ghetto, Israel Hayom reported.

The tefillin are a century old but well-preserved, and seem to have been placed in the bunker by the Jews who hid there during the Holocaust. Though the Jews were removed from the bunker and likely killed, the tefillin remained in their hiding place.

The bunker itself was built by the Warsaw Ghetto rebels.

The discovery comes as Polish authorities began a renewal of the city, destroying Warsaw Ghetto buildings in order to construct residential buildings. During the construction, the entry to a bunker was discovered, leading workers to investigate.

When one of the workers descended into the bunker to clear it out, he discovered dozens of pairs of tefillin hidden in a corner behind books and other objects.

Representatives of the Shem Olam Institute, who are scattered throughout Europe, heard of the discovery from local contacts who they keep in touch with in order to gather information on such cases.

“The discovery of dozens of pairs of tefillin concentrated in one place testifies to the Jewish lifestyle that they kept carefully in the ghetto,” said Shem Olam Director Rabbi Avraham Krieger. “Despite the horrors and the brutal reality they lived in, they continued to keep the traditions and customs they were raised on.”

“The number of pairs of tefillin testifies to underground minyans (quorum of 10 men for prayer), which they managed to hold within the bunker, underground and under the noses of the Nazis. The tefillin were hidden beside weapons and the equipment that served the rebels of the Warsaw Ghetto, testifying to the importance that they held in the Jews’ eyes.”