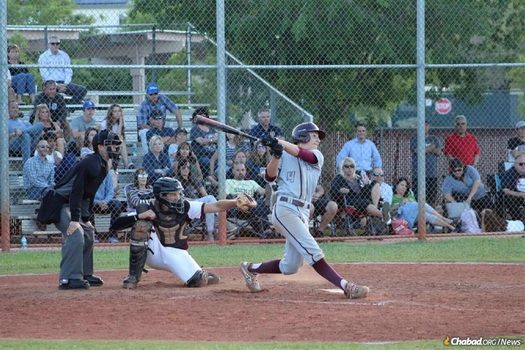 18-year-old Elie Kligman became the first Jewish player to be drafted by a major league team with the understanding that he would never play on Shabbat.

On a bus with his teammates on Israel’s Olympic baseball team heading to Hartford, Conn., 18-year-old Elie Kligman received a call he had long been hoping for. The Washington Nationals had just selected the Las Vegas native in the 20th round of the Major League Baseball draft. In doing so, Elie became the first Jewish player to be drafted by a major league team with the understanding that he would never play on Shabbat.

“The Nationals were fully aware that I won’t play on Shabbos,” Elie told Chabad.org. I have always been very clear about that. That is not going to change. Keeping Shabbos is for G‑d. There’s no argument about putting baseball first and G‑d second.”

Elie’s dream has been to play in the major leagues ever since he was a little kid playing catch in the backyard with his dad, Marc Kligman, an attorney and sports agent. But being a baseball player is not what defines him, says Elie.

Elie’s commitment to G‑d and Judaism iswell-documented. He is steadfast in his observance and has never played a game on Shabbat. He prays three times a day, whether in his hometown of Las Vegas or when he’s on the road, only eats kosher and makes time to study Torah. For Elie, baseball has become a way to teach others about Judaism.

“I’ve found that people are very interested in my observance.” Elie says, “I’m constantly being asked: “What can you eat? What do you do on Shabbos?” We’ve had people stay at our house and experience Shabbos. So there have been opportunities to teach a bit about Judaism.”

Rabbi Chaim Ozer Metal, the youth director at Chabad of Summerlin in Las Vegas, says the family’s love of Judaism has impacted others.

“Because of Elie and his family’s strong sense of Judaism, even when being out there playing baseball, they once encouraged a family to meet with me, which together resulted in the family putting mezuzot on their doors and enrolling their children in Hebrew school,” relates the rabbi.

Elie’s admirable dedication to G‑d, Torah and mitzvot should come as no surprise. He has an excellent role model in his father to emulate.

“My parents never pushed religion on us and always explained the “why” of observance. I enjoy learning Torah because it builds a stronger connection to G‑d. That’s a great thing.”

‘A Successful Blend of the Two Worlds’

Marc Kligman says he hopes to show his children that it’s possible to be a successful professional and stay true to one’s Judaism. He first became attracted to Torah and mitzvot when he became involved with Dr. David Kaufmann and Chabad as a law student at Tulane University in New Orleans.

“At first, there was some anxiety about becoming religious,” acknowledges Marc. “There was the uncertainty of how Jewish observance would affect my career, social life and future family. Plus being so into sports, Saturday is a big day. Looking back, I think our family is a testament to a successful blending of the two worlds.”

It is Marc Kligman’s belief that staying true and being proud of his Judaism has opened far more doors than it has closed.

“For me, wearing a yarmulke felt like a magnet. So I avoided wearing it in public at first. Then a few years ago, I bought some kosher Chinese food and took it to the baseball stadium. As I was eating, one of my players said in all earnestness in Spanish, “Where’s your little hat?” Once I realized that my clients didn’t care, I just put on the yarmulke and was true to myself.

“Wearing a yarmulke, you have to be mindful of your conduct, of representing G‑d and the Jewish people. Because I’m an outward Jew, many strangers approach me—like the woman who wanted to engage me in conversation at the airport in Panama or a guy in Walmart in Waco, Texas, who wanted to shake my hand because he’s a fan of Israel.”

As for Elie, while he’s thrilled to have been selected in the draft, he still hasn’t decided if he will sign a contract with the Nationals or first attend college. Whatever he decides, his exposure and influence will only continue to expand, says his father, and Elie hopes that Jewish kids around the globe can now see that it is possible to chase a dream without compromising who they are.