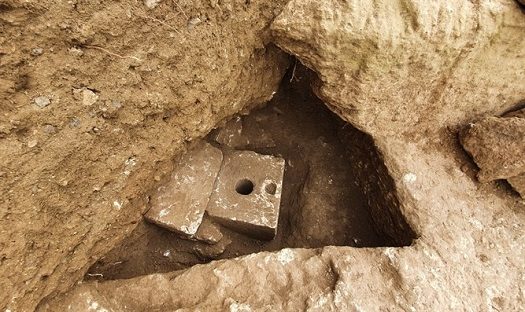 A rare toilet cubicle from the First Temple Period, which was part of an ancient royal estate that operated at the end of the Kings of Judean period (7th century BCE), was discovered on the Armon Hanatziv promenade in Jerusalem, where the Israel Antiquities Authority and the City of David, about two years ago, uncovered the remains of a magnificent building which overlooked the City of David and the Temple Mount, including the private toilet cubicle.

The bathroom was hewn as a rectangular-shaped cabin, with a carved toilet, which stood over a deep-hewn septic tank. The toilet, made of limestone, is designed for comfortable sitting, with a hole in the center.

According to Yaakov Billig, Director of the Excavation on behalf of the Israel Antiquities Authority, “A private toilet cubicle was very rare in antiquity, and only a few were found to date, most of them in the City of David. In fact, only the rich could afford toilets. A thousand years later, the Mishnah and the Talmud raised various criteria that defined a rich person, and Rabbi Yossi suggested that to be rich is “to have the toilet next to his table.”