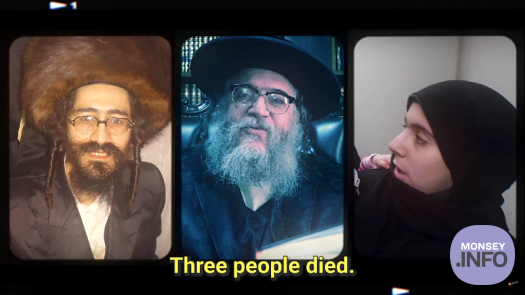 A new 35 minute documentary shares the story of a 20 year old survivor of the Lev Tahor cult’s suspenseful escape from their Guatemalan compound.

The film, produced by several members of the Hasidic community who are trying to expose the abuse and help people trapped inside Lev Tahor, follows Yoel Levy as he meets fellow cult survivor Rabbi Yaniv Assis for the first time in 10 years.

Rabbi Assis is a respected educator and Torah scholar who spent time with the cult when they were based in a small town in Quebec’s Laurentian Mountains. Yoel Levy was born and raised in Ste Agathe, Quebec to parents who were members of Lev Tahor, a semi-secluded Jewish cult with members of its leadership sitting in prison for kidnapping, child abuse, and child sexual exploitation. They both allowed a film crew to document their reunion, where they tried to piece together the twisted Lev Tahor puzzle.

Using newly leaked documents, photos, and videos, the documentary details the cult’s dramatic midnight flight from Quebec as authorities were closing in to rescue 14 children, and their travels to several locations, each more contained and enclosed than the previous, tightening the noose around members’ families with stricter rules and regiments.

Once inside their own remote Guatemalan compound, kept inside with barb wire and armed guards, three easily avoidable deaths took place, including the tragic passing of Yoel’s father.

Facing constant abuse, punishment, and hunger, Yoel made a dramatic exit following an engagement to a girl he had never met. He was the first escapee from the compound. His brother Mendy followed, and numerous others have since managed to leave, some (like Yoel) dropping their Jewish observance, while others (like Yaniv) opting to grow in their religious beliefs.

Following the incarceration of four members of Lev Tahor’s administration, including their current leader Nachman Helbrans, more members have left the cult. Providing them with food, travel expenses, and lodging in safe homes with religious families is a group of people who call themselves “Lev Tahor survivors.” They operate a website, LevTahorSurvivors.com, and a phone line those committed to escaping the cult can call (the number is +1-725-226-3636).

“The goal of this documentary is to create awareness about the destruction of lives taking place inside Lev Tahor,” said Meyer*, a member of Lev Tahor Survivors. “We need your help in spreading the video and the information contained inside it to anyone who may be supporting the cult. We are working on several more short documentaries and are preparing to release incriminating documents from a hard drive smuggled out of the compound. We will not stop until the abuse ends and members are in control of their own lives.”

More information, how you can help, and further films exposing the cult can be found at LevTahorSurvivors.com