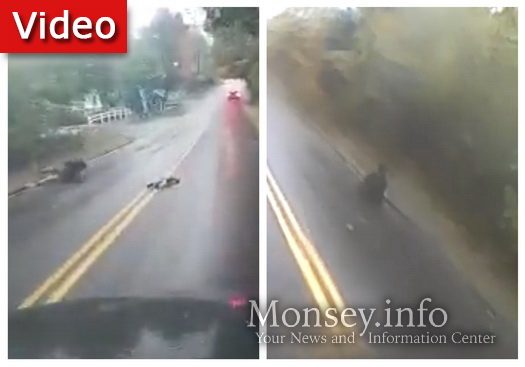 A Jewish man was saved from legal trouble after his vehicles dashcam caught a man attempting to frame him in Rockland County. The alleged con went to the police, claiming he was injured by the Jewish man in a hit and run.

The Dashcam video of a con man attempting to frame a Jewish resident for a hit and run went viral on Wednesday.

The incident occurred this past Sunday, as the Jewish man was driving on a wet Monsey area road. The con man, standing on the road with a skateboard, suddenly tossed the board under the Jewish mans car, as he “fell” to the ground.

The Jewish man slowed down, but soon continued driving after the con man stood up, obviously unhurt.

The con man then allegedly laid himself back down, and flagged another motorist to contacted the police alleging that the Jewish driver had actually hit him, making the incident a hit and run.

The motorist called, and after following the Jewish driver, gave the Jewish mans licence plate number to the police.

As a hit and run is a class A Felony with mandatory jail time, the police were soon knocking at the Jewish mans door, but he was not home.

On Monday, the Jewish man received a phone call from the police, and walked over to the police station with the dashcam footage in hand.

The Jewish man reported that after seeing the footage, the police officer remarked that he was free to go, and that the dashcam was the best investment he had ever made.