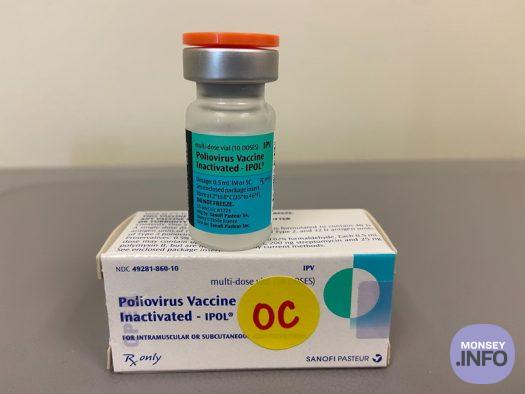 The New York State Department of Health (NYSDOH) today updated New Yorkers on the poliovirus in New York State. Following the identification of polio in early June wastewater samples in Rockland County, the virus has now also been detected in wastewater samples from June and July in two geographically different locations in Orange County and July samples from Rockland County.

Sequence analysis by the Centers for Disease Control and Prevention (CDC) has found that seven positive samples from both Rockland County (three) and Orange County (four) are genetically linked to the individual case of paralytic polio previously identified in a Rockland County resident. These finding provide further evidence of local—not international—transmission of a polio virus that can cause paralysis and potential community spread, underscoring the urgency of every New York adult and child getting immunized, especially those in the greater New York metropolitan area. NYSDOH will continue its active, ongoing wastewater surveillance efforts in partnership with CDC.

“Based on earlier polio outbreaks, New Yorkers should know that for every one case of paralytic polio observed, there may be hundreds of other people infected,” State Health Commissioner Dr. Mary T. Bassett said. “Coupled with the latest wastewater findings, the Department is treating the single case of polio as just the tip of the iceberg of much greater potential spread. As we learn more, what we do know is clear: the danger of polio is present in New York today. We must meet this moment by ensuring that adults, including pregnant people, and young children by 2 months of age are up to date with their immunization – the safe protection against this debilitating virus that every New Yorker needs.”

New Yorkers should know that the latest environmental findings do not indicate that the individual identified in Rockland County was the source of the transmission, and case investigation into the origin of the virus is ongoing. NYSDOH continues to work with global, national, and local public health authorities to aggressively assess the spread of the virus and ensure prevention measures, particularly immunization clinics, are in place – as the best way to keep New York polio-free is to maintain high immunity across the population through vaccination.

All New Yorkers who are unvaccinated, including children by 2 months of age, those who are pregnant, and people who have not completed their polio vaccine series previously should get immunized right away. Unvaccinated New Yorkers who live, work, go to school in, or visit Rockland County, Orange County, and the greater New York metropolitan area are at the highest risk of exposure.

A core component of CDC’s standard child immunization schedule and required by NYSDOH for all school-aged children, most children are already vaccinated. New Yorkers who are unsure of their vaccination status, or that of a loved one, should reach out to a healthcare provider right away to get vaccinated or receive a booster. As of August 1, 2022, Rockland County has a polio vaccination rate of 60.34 percent and Orange County has a polio vaccination rate of 58.68 percent, compared to the statewide average of 78.96 percent, among children who have received 3 polio immunizations before their second birthday.

“It is concerning that polio, a disease that has been largely eradicated through vaccination, is now circulating in our community, especially given the low rates of vaccination for this debilitating disease in certain areas of our County,” Orange County Health Commissioner Dr. Irina Gelman said. “I urge all unvaccinated Orange County residents to get vaccinated as soon as medically feasible.”

While there is no cure for polio, it is preventable through safe and effective immunization. According to CDC, inactivated poliovirus vaccine (IPV), which is the only polio immunization that has been given in the United States since 2000, protects 99% of children who get all the recommended doses.

NYSDOH has increased communication to healthcare providers, stressing the importance of testing and the on-time administration of the polio vaccine among their patients. In accordance with CDC:

Polio is a serious and life-threatening disease. Spread from person-to-person, polio is very contagious, and an individual can transmit the virus even if they aren’t sick. Asymptomatic spread is a high concern among health officials, particularly following the identification of a paralytic, symptomatic polio case. Based on evidence from earlier polio outbreaks, health officials estimate that for every one case of paralytic polio observed, there may be hundreds of other people infected.

Symptoms of polio, which can be mild and flu-like, can take up to 30 days to appear, during which time an infected individual can be shedding virus to others. Some polio cases can result in paralysis or death. According to the WHO, of those paralyzed, 5-10% die when their breathing muscles become immobilized.

NYSDOH has also engaged community-based organizations in the affected areas to partner on outreach, disseminating education about the virus, the safe, protective nature of the well-established immunization, and the gravity of the current situation.