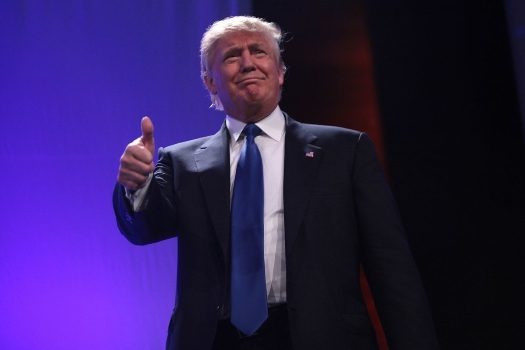 Op-Ed: 10 Reasons for a Frum Person to Vote for Trump

Should a Frum person vote for Trump of Biden? Dovid Goldbaum lays out the case with ten Reasons a frum person should vote for Donald Trump.

1. He is Pro-Life
The greatest tragedy in Modern American history is unquestionably abortion. Ever since the tragic supreme court ruling of Roe V. Wade, well over 55 million abortions have been carried out. The silent holocaust of defenseless unborn babies. Trump is unabashedly pro-life. He has cut funding to the Planned Parenthood abortion clinics. He also has elected to the Supreme Court, the first female justice in history who is openly pro-life, Amy Coney Barret.

2. He believes in school choice
The biggest economic challenge for a large frum family today is the massive tuition costs for private schools. Trump supports School Choice, which enables a parent to send their kid to the school of their choice and receive federal funding.

4. He supports the Orthodox community.
Many of the highest level people in the Trump administration are frum. Starting from his daughter and son-in-law, Jared and Ivanka Trump, to Israel’s ambassador David Friedman among others, a lot of high-level staffers are Frum and understand the Frum community’s unique needs. An example was when 100.000 esrogim were stuck in Italy because of Covid. Avi Berkowitz, negotiated their release and New York had Esrogim in time for Sukkos.

5. He is a strong supporter of the freedom of religion
Tragically, during these difficult times when a global pandemic is raging, many elected officials are abusing their powers. A sad example is in New York. Unfortunately, New Yorks elected officials are deliberately targeting the Jewish Community.  From closing down the shuls and schools, to targeting our small businesses, to having inspectors give out undeserved fines, New York is a sad example of abuse of power and antisemitism.  President Trump unabashedly supports the religious community and recently received an unprecedented letter of support from the Frum Communities’ biggest Rabbis.

6. President Trump took away the Palestinian Authority’s funding
The Palestinian Authority has received billions of dollars of aid from the US, hundreds of millions every year. Much of that money has gone to support terrorism and to enrich their leaders. Trump was the first President to have cut their funding.  Ever since he cut their funding, they have been much diminished and terrorism has gone down.

7. President Trump recognized our sovereignty over the Golan Heights and much of Judea and Samaria
Ever since Israel miraculously conquered large amounts of territory during the 6-day-war, the international community has either called it disputed or occupied.  The United States, the most powerful country in the world, has finally recognized that these lands belong to us.

8. The President has brokered three new peace deals, the first in 26 years
Until this administration, the conventional wisdom among Middle East peace brokers, has been that the road to peace in the Middle East has to start with the Palestinians. President Trump took an unconventional approach and after being rebuffed by the Palestinians, went over them to all of the Arab Countries. It definitely paid off!!

After working hard for 3 years, in a time span of six weeks, we have made peace with the United Arab Emirates, Bahrain and Sudan. At least five other countries including Saudi Arabia want to follow, but that depends on another Trump term. There have only been two other peace deals in Israel’s history, with Jordan and Egypt. Both of them entailed giving up land and are a “cold peace”. Peace with the U.A.E and Bahrain are warm ones. We did not give them land!! There is now a kosher restaurant in the tallest building in the world!

9. The President ripped up the Iran deal
Under the Obama/ Biden administration, one of the worst deals in history was made! They allowed Iran, a genocidal regime openly calling for the destruction of Israel, to have a nuclear bomb after ten years. They gave Iran, the world’s largest sponsor of terrorism 150 billion dollars and 1.7 billions dollars in cash. One can only imagine the horrible things that Iran did with that money!

Trump immediately ripped up the deal. He also killed their top general, General Soleimani, the world’s top terrorist. He is the man responsible for a major share of the world’s terrorism. The President slapped massive sanctions on them causing their economy to totally capsize. If President Trump gets another term, it is very likely that they will bow to the pressure and sign another deal, this time a deal that favors the Jewish people.

10. He freed Sholom Mordechai Rubashkin
In November 2009, Rubashkin, the CEO of America’s largest kosher slaughterhouse, was sentenced to 27 years in prison. This was essentially a life sentence for a first-time offender. The Judge, Linda Reade, sentenced him to 2 more years than was requested by the prosecution. The Jewish Community rallied behind him for this egregious judicial overreach and many asked President Obama to pardon or commute his sentence. Obama refused.

On December 20th 2017, President Trump commuted his sentence. Rubashkin was able to go home and live his life with his wife and ten children. The Frum Community is eternally grateful the Trump for showing kindness and righting a historic wrong.

We are truly living in a historic era with President Trump, unquestionably being the closest friend that Israel and the Frum Community have ever had in a US President.