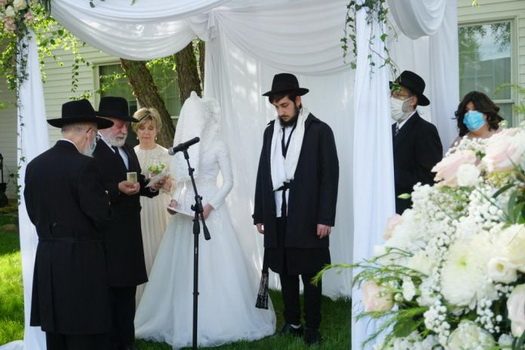 Last week I celebrated the wedding of my younger brother Akiva. It was a simple but beautiful affair, with just immediate family and a couple of close friends attending.

Yosef Greenberger, who did everything from the one man band to the zoom broadcast, shared with me that he’s done several of these weddings. And while it’s odd to see such small weddings, he also noted how exceedingly joyful they are. Everyone attending is someone who truly loves the couple and wants to be there. The joy is truly palpable.

At the end of the wedding that was a common sentiment from all of the attendees. Despite everyone’s reservations, it felt far more meaningful than the massive weddings I was used to attending. The speeches were heartfelt and emotional and the energy in the room was incredible.

This text message from the bride’s sister to a relative watching on Zoom says it all,

“There are beautiful silver linings that have come out of covid, notwithstanding the pain that many of us did suffer, but having a small intimate wedding with no worries of color schemes, what food, what clothes, … left the couple with purely happy to see each other and be together again, and everything else was enjoyed for what it was.
The food was great
The flowers were beautiful
Clothes ended up coordinating somehow
Kalla ended up making her own hair in the bathroom and loving it (otherwise considered a nightmare !)
Kalla had an out of town wedding in a new place, but as long as Akiva was there all is good. The hardest was not having family present , as it should be but they all got dressed and set their tables and ate with us and prepared birkas kohanim and musical presentations.
The ‘stripped down’ wedding laid bare to the most special intimate joyous wedding illuminating the essence, the bride and groom and they’re coming together in commitment to each other.

Weddings should probably carry on in this intimate manner post covid
A family part alone first and then friends and guest for dance and dessert portion
Forget the fuss and stress !
-My 2 cents”

So, have we been doing weddings wrong this whole time?

I’m not advocating for immediate family only weddings, but things seem to have gotten out of hand. Reading through this thread of families going into debt to spend insane sums of money on one night is eye-opening. Even if the payments aren’t coming from debt, wouldn’t that money be better saved for a rainy day fund or better spent on a down payment for a house?

After the wedding, someone showed me this letter from the Lubavitcher Rebbe, circa 1960. In it, the Rebbe writes that he’s not pleased with the waste of money on large weddings in fancy halls, which don’t have a spiritual or even a physical benefit. The joy found in more intimate weddings is tangibly greater than that of larger weddings in official halls. Of course that depends on both families and the bride being in full agreement about having a simpler wedding.

Will COVID-19 bring that change?

It won’t be without controversy. There are many people that make their living off over the top weddings, and I do feel bad for them. But hearing from families going into debt for a party that lasts for a few hours just seems wasteful and influenced by peer pressure.

Like I say with credit cards, the system is subsidized by people falling into a trap of debt buying things they can’t afford and then paying interest. If you’re susceptible to that behavior, then don’t start in the first place.

The wedding industry seems to have similar problems. Many people are spending more than they can afford and going into debt for something they may not even want. Are weddings really worth that kind of pain, or again, is it just peer pressure and worrying about what the mechutanim will think?

Over 1,300 people signed the Simcha Initiative to have smaller and simpler weddings. The Jewish Press had a great interview with Rav Reisman about his goals with that initiative.

But will it work? Can we end the madness of families going into massive debt to pay for a wedding? What steps can people take to make things simpler and smaller? Or is a return to expensive and massive weddings inevitable?