« Stabbing Victim No Longer In Critical Condition, According to Chief Weidel
Picture of the Day » 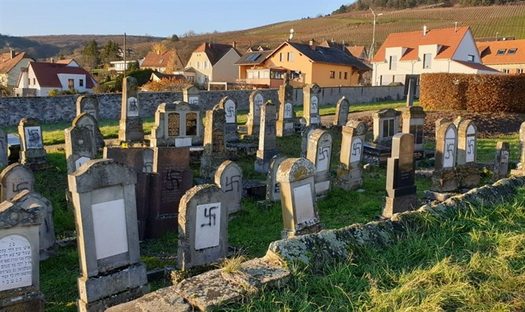 Rabbi Avraham Weill, Chief Rabbi of Strasbourg and a member of the Standing Committee of the Conference of European Rabbis, on Tuesday visited the Jewish cemetery in Westhoffen, west of Strasbourg in France, which was vandalized with swastikas and anti-Semitic graffiti.

“Unfortunately, this is the third Jewish cemetery which has been desecrated in less than a year. The criminals, likely from the radical right, last week spray-painted something that was unclear on a school in the village of Rohr, which is located in the Rhine region as well. Only today did we realize that they intended to desecrate the cemetery in Westhoffen. We are shocked and appalled,” said Rabbi Weill.

“Two weeks ago, I met with the senior police officer on the matter. They trick the security forces here and strike vulnerable immigrants as well, and they have to find the way to resolutely deal with these lowly perpetrators,” he added.

The government’s regional authority said on Tuesday it was investigating the damage to 107 graves at the cemetery in Westhoffen.

About 20 kilometers away, it said, anti-Jewish inscriptions were also found in the village of Schaffhouse-sur-Zorn.

The Alsace region has suffered a rash of racist vandalism over the past year, most notably the desecration of 96 tombs at a cemetery in Quatzenheim in February, which drew nationwide outrage over a spate of anti-Semitic attacks.

In March, vandals scrawled anti-Semitic graffiti on a former synagogue in in the town of Mommenheim.

Two days earlier, vandals toppled a monument to a synagogue which was destroyed by the Nazis during World War II.

« Stabbing Victim No Longer In Critical Condition, According to Chief Weidel
Picture of the Day »