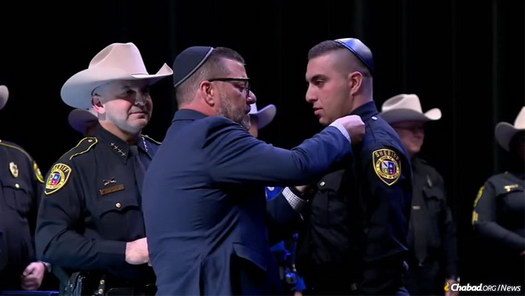 Seth Frydberg was sworn in as the newest deputy sheriff in Bexar County, Texas, with the help of his father, Felix Frydberg, center, the son of Holocaust survivors, as Sheriff Javier Salazar, left, looked on.

San Antonio, the oldest municipality in Texas, is known for its deep history and culture. It was part of the Spanish Empire when it was first settled, and later, the Mexican Republic. Now the seventh-largest city in the United States, with more than 1.5 million residents, it’s home to an estimated 10,000 Jewish residents, one of the largest Jewish communities in Texas.

Growing up in a suburb of the city, Seth Frydberg—Bexar County’s newest deputy sheriff and the first to proudly wear a kippah with his uniform—says he spent many summers enjoying Camp Gan Izzy. A former student at Chabad’s Gan Gani preschool—his mother, Sandy, made sure to enroll him in all of Chabad’s children’s programs—and now involved with Chabad Young Professionals of San Antonio, Frydberg, 22, recalls the spirit of his childhood years at Gan Izzy. “There was a song we’d sing over and over,” he recalls, “ ‘I’m a Jew and I’m proud and I’ll sing it out loud … .’ ”

His grandparents, Moshe and Esther Chana Frydberg, were born in Lodz, Poland, home to the second-largest pre-war Jewish community in Eastern Europe. They were both survivors of Auschwitz, where Moshe lost his first wife and a son. The couple met and married after being liberated 75 years ago from the death camp by the Red Army in January of 1945, settling in post-war Munich, Germany.

In Munich, they began building a Jewish family in the shadow of the crematoria and death marches. Their two oldest children were born there, a German city whose post-war Jewish community had been reduced to a small group of survivors. After moving on to Israel, Seth’s grandparents finally settled in San Antonio, where their youngest child, Seth’s father, Felix, was born.

“It wouldn’t have been in their imagination to have grandchildren like they have,” says Felix Frydberg, who in addition to his son, the new sheriff’s deputy, has a daughter who is a veteran of the Israel Defense Forces. “Protecting the community while representing the Jewish community. To say they would enjoy nachas is an understatement!”

“My grandparents were forced to wear a Jewish star on their chest,” Seth Frydberg tells Chabad.org, “and I have the privilege to work for law enforcement with a badge on my chest.”

In early January, Frydberg graduated from the Bexar County Sheriff’s Academy as a sheriff’s deputy, proudly displaying his kippah at the graduation ceremony.

Before administering the oath, Sheriff Javier Salazar made it a point to refer to Frydberg.

“I’ve got cadet Frydberg, who’s a grandson of two Holocaust survivors, who, for the first time that I know of is actually wearing a yarmulke with his uniform,” said Salazar. Noting the diverse makeup of Bexar County, Salazar said: “We want to be reflective of the community that we serve.”

Amid a recent uptick of anti-Semitic violence in the United States, a nation where millions of Jews had arrived fleeing the pogroms and massacres of 19th- and 20th-century Europe, Frydberg feels that wearing his kippah broadcasts a message of support. “A big part of why I wanted to wear the kippah is to let Jewish people know that someone in my position has their back,” he says.

At the graduation, Frydberg, flanked by Salazar, and his father, Felix, was appointed to serve as a liaison between the local Jewish community and the sheriff’s department. “It was with a sense of pride and accomplishment that I wore a uniform and kippah at the same time,” he says. “I want to be in a position to help people in the best of times and the worst.”

At the graduation ceremony was Rabbi Eli Nochum Block, co-director with his wife, Tzivia, of Young and Jewish San Antonio/Chabad Young Professionals.

Only a few years older than Frydberg, the rabbi grew up together with him in San Antonio, where Block’s parents, Rabbi Chaim and Rivkie Block, established Chabad of San Antonio in 1985.

Witnessing Frydberg join the sheriff’s department, Block reflects on the education and values that Chabad instills in their students and campers from a young age.

“We place a very strong emphasis on the love of Judaism,” says the young rabbi. “It’s not a burden, but our treasured heritage.”

What makes this so special to Block is that Frydberg “places his life on the line every day, and takes his Jewish pride with him in a very real way.”