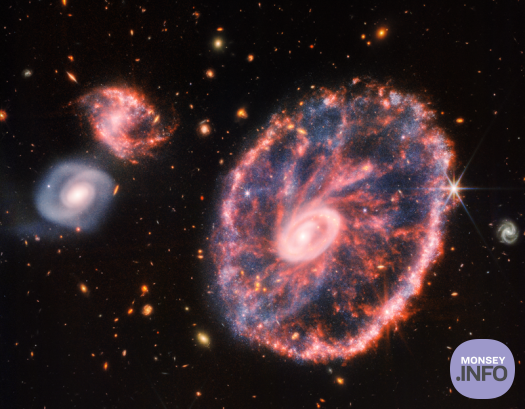 Picture of the Day

NASA’s James Webb Space Telescope has peered into the chaos of the Cartwheel Galaxy, revealing new details about star formation and the galaxy’s central black hole. Webb’s powerful infrared gaze produced this detailed image of the Cartwheel and two smaller companion galaxies against a backdrop of many other galaxies.

The Cartwheel Galaxy, located about 500 million light-years away in the Sculptor constellation, is a rare sight. Its appearance, much like that of the wheel of a wagon, is the result of an intense event – a high-speed collision between a large spiral galaxy and a smaller galaxy not visible in this image. Collisions of galactic proportions cause a cascade of different, smaller events between the galaxies involved; the Cartwheel is no exception.

The collision most notably affected the galaxy’s shape and structure. The Cartwheel Galaxy sports two rings — a bright inner ring and a surrounding, colorful ring. These two rings expand outwards from the center of the collision, like ripples in a pond after a stone is tossed into it. Because of these distinctive features, astronomers call this a “ring galaxy,” a structure less common than spiral galaxies like our Milky Way.

The bright core contains a tremendous amount of hot dust with the brightest areas being the home to gigantic young star clusters. On the other hand, the outer ring, which has expanded for about 440 million years, is dominated by star formation and supernovas. As this ring expands, it plows into surrounding gas and triggers star formation.

Other telescopes, including the Hubble Space Telescope, have previously examined the Cartwheel. But the dramatic galaxy has been shrouded in mystery – perhaps literally, given the amount of dust that obscures the view. Webb, with its ability to detect infrared light, now uncovers new insights into the nature of the Cartwheel.