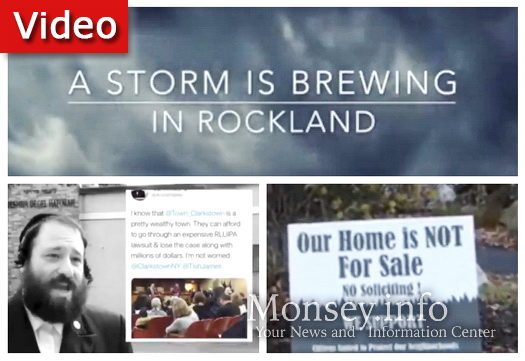 An anti-Semitic video published by the Republican Party of Rockland has brought a storm of condemnation from activists and elected officials Wednesday. The video attempted to stir up voters by painting the Orthodox Jews of Rockland as taking over Rockland, and calling on them to vote against the Jewish vote.

Update: The video has been taken down from the Rockland County Republican Party facebook page.

A political video aimed to incite voters was published by the Republican party of Rockland Wednesday, and faced immediate backlash.

The video, which called on voters to back county executive Ed Day, painted the Orthodox Jews of Rockland as taking over Rockland control, blaming them for “overdevelopment,” and using redistricting to “take control” of Rockland.

The shocking conspiracy video started off with storm clouds churning, and the words, “A Storm is Brewing in Rockland.” The propoganda used in the video could be straight from the Pogroms of the last century, or the Nazi Era.

The video uses the slogan “If they Win, You Lose,” as a way of galvanizing the voters against what the video calls, Rockland Legislator Aron Wieder’s Bloc vote.

A flurry of condemnations and demands for its removal poured in from activists and elected officials.

Aron Wieder tweeted, “Storm clouds are indeed gathering! As it is a dark day in Rockland where such a shameful video has come to light.”

Storm clouds are indeed gathering! As it is a dark day in Rockland where such a shameful video has come to light. As Rockland County Legislator, I demand RocklandNYGOP & @EdDay denounce & pull this hate-filled video immediately. @lawrencegarvey @NickLangworthy @NewYorkGOP https://t.co/6Uu1I7UwnO

New Yorks Attorney General Letitia James tweeted that “The anti-Semitic video from the Rockland County GOP is deeply disturbing.” and “They must remove & condemn it.”

The anti-Semitic video from the Rockland County GOP is deeply disturbing. They must remove & condemn it. Saying that members of the Jewish community are a threat to families, our safety & that they must be stopped is despicable.

We must all stand together to denounce this hate.

Other officials including Councilman Chaim Deutsch, and Simcha Eichenstein also tweeted against the video, both calling for its removal.

The Rockland County Republican Party should be ashamed of themselves for putting out such an Anti-Semitic and fear mongering video that attacks their Jewish neighbors.