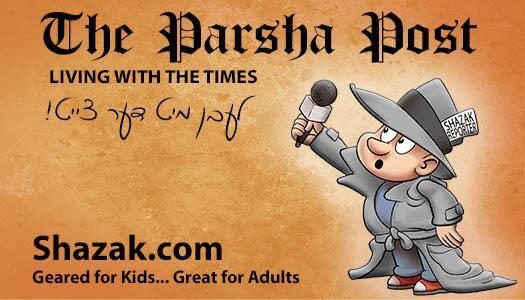 For a lot more Parsha fun, including a weekly fun video, subscribe to Shazak!

The newly built Mishkan has been designated by the Master Creator as the site of a constant stream of sacrifices.

“Speak to Bnei Yisrael,” said HaShem to his agent Moshe Rabbeinu. “Teach them the laws of sacrifices… Korbanos. Tell them to bring only Kosher animals – cattle, sheep and goats. This is how they will serve Me, come close to Me, and become My holy nation.”

With all those animals in the Holy Tabernacle, it is still unclear to TNS how the curtains and other furnishings will remain clean and beautiful. Stay tuned for future updates.

“I was really impressed when I saw the great effort the Rambam put into creating these two volumes,” commented Shmerel Sofer, TNS literary critic. “After all, he’s the one who wrote, ‘I believe in the coming of Moshiach with perfect faith.’ And won’t we need sacrifice instruction manuals when the Beis HaMikdash is built?”

TNS has learned that while still living in Spain, Maimonides wrote a commentary to the sections of the Mishnah dealing with sacrifices, which he referred to as a subject “neglected by even the greatest Torah scholars,” yet, these laws were “especially dear to my heart.”

In a surprise move, the great Kohen, Rabbi Yisrael Meir Kagan, a.k.a. Chofetz Chaim, has called for young men, particularly those of Kohen ancestry, to study the laws of animal sacrifice and all other information relevant to the Holy Temple. “Going back over 700 years the famous Rambam encouraged Jews to study the laws of Korbanos,” commented Aharon Kohanavitch, a student of the great Rabbi. “But sadly, his books were used mainly for reference, not really for serious study. I hope and pray that this new Korbanos Learning Campaign will change things for the better. After all, soon the Beis HaMikdash will be built and we’ll need to know these laws perfectly.”

The book of Vayikra, a.k.a. Leviticus, a.k.a. the Levite Handbook, is the constant companion of any serious Kohen or Levi. Now, after years of only being available in parchment scroll, Holy Temple Publishers has announced that it will release this classic in a single-volume paperback.

“This is going to be a real page turner,” commented Shmerel Sofer. “One you get into it, this is the one book you’ll want to learn again and again—well worth the sacrifice.”

Have you sinned lately? Are you in the mood for bringing a Korban “just because”?

Get all your Korban supplies from 1-Stop Sacrifice Shop. Sheep, goats, doves, flour, oil, and wine. Call 1-800-FAT-SHEEP and mention Shazak for a special discount.