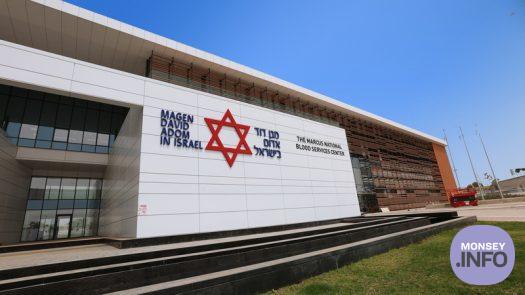 President Isaac Herzog: “I am so delighted to join you in inaugurating the Marcus National Blood Services Center, which embodies the most moving essence of our shared humanity. To receive a blood transfusion – the irreplaceable gift of life – from complete strangers is a stark reminder that we are one living, breathing tapestry of humanity, now safeguarded in this impressive new center.”

A first in its concept, design, engineering, and capabilities, the facility was built at a cost of $135 million, funded primarily by American Friends of Magen David Adom (AFMDA), MDA’s U.S.-based fundraising affiliate. The new facility will double the country’s annual blood-processing capacity and potentially save tens of thousands of lives every year.

The center bears the name of Bernie Marcus, the founder of Home Depot, and his wife, Billi. The American philanthropists generously donated $35 million to the project.

“On a visit many years ago to Israel’s blood bank, amid the missile and rocket attacks, I realized how delicate and vulnerable the blood system was,” recalled Bernie Marcus. “I am happy that we participated, from the very start, in the construction of this wonderful building, where Israel’s blood supply will be protected for all its citizens, Jews, Christians, and Muslims alike.”

Other significant contributions were made by Miriam and the late Sheldon Adelson; The Leona M. & Harry B. Helmsley Charitable Trust; and Bloomberg Philanthropies, Michael R. Bloomberg’s charitable organization. Another 600 major gifts were donated by Americans, some 25 of which were each one million dollars or more.

“The Marcus National Blood Services Center will enable Magen David Adom to save countless lives during times of war and peace, thanks to the Marcus’s and the generous support of each and every one of our committed American donors,” said Catherine Reed, chief executive officer of AFMDA.

Considered a cornerstone of Israel’s national security, the strategic facility was designed and constructed in cooperation with the Prime Minister’s Office, Ministry of Defense, Israel Defense Forces, and the National Cyber Security Authority.

“Blood is the essence of life, our most precious gift; we must do everything possible to preserve it. History has taught us to always be prepared and no country on Earth has ever been this proactive in protecting its blood supply,” said Reed.

“Magen David Adom and the people of Israel are indebted to our friends in the diaspora for making this dream a reality,” said Eli Bin, director-general of MDA. “The Marcus National Blood Services Center will ensure constant blood supplies under almost any scenario. This is another world first from Magen David Adom in our daily struggle to preserve life in the face of adversity.”

The current national blood services facility in Ramat Gan was built in the 1980s and is not large enough to meet the demands of Israel’s growing population or secure enough to meet the country’s needs in times of war. In the past, during rocket attacks, MDA has had to cease processing blood and move the country’s blood reserves into a bomb shelter, interrupting blood production at a time when it might be needed most.

In contrast, the new Marcus Center is shielded with extra-thick concrete walls, blast doors, and airlocks, as well as biological and chemical protection that extends across three subterranean floors. The three above-ground floors house the Human Milk Bank, where mothers’ milk is collected for premature and ill infants, as well as the blood donation center, administrative offices, conference rooms, and dining halls.

The second underground floor houses the Cord Blood Inventory, an R&D molecular lab, and a chemical and biological warfare air-filtration system that enables staff throughout the building to continue working and processing blood in the event of a chemical or biological attack.

At the heart of the third and deepest level lies the Blood Storage Vault, a 300-square-meter safe room shielded against the most severe missile threats, in which Israel’s strategic inventory of 25,000 blood components will be safeguarded in times of war.

To ensure the highest levels of protection and continuity of operations in war scenarios, every critical system has a secondary system, including two ramps leading into the underground floors, four sets of elevators, and four generators.

“With threats from Iran and beyond, this new maximum-security facility will prepare the national emergency medical service to preserve life in the hardest of conditions — for decades to come,” said Reed.